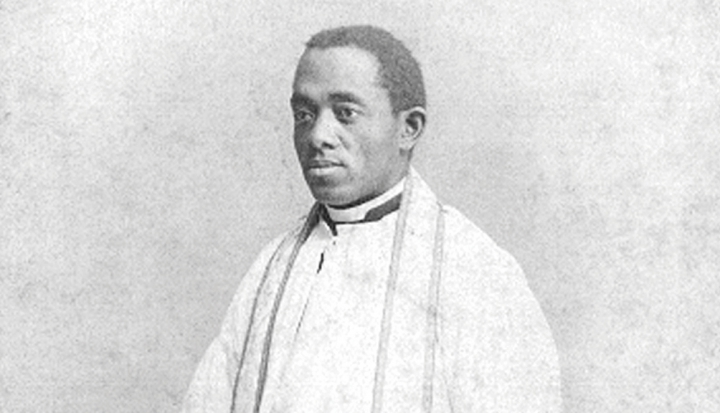 I had never heard of Father Augustus Tolton until I took a course in black Catholic history at Xavier University in New Orleans. I did not know that he had ministered in Chicago (where I was from) nor of the many difficulties he had encountered as he had struggled to “answer the call” to become a Catholic priest in the United States in the late 19th century.

Tolton is known as the first American priest of African descent who identified as Black (three brothers—James, Patrick, and Alexander Healy—were ordained earlier, but they identified and “passed” as white). In 2010 the Archdiocese of Chicago officially opened the process of canonization for Tolton.

He was born a slave in 1854 in Brush Creek, Missouri. His father, Peter Paul Tolton, escaped slavery to join the Union Army (later dying as a soldier), and in the 1860s his mother, Martha Tolton, fled with her two sons and an infant daughter, dodging Confederate bullets and traveling at night. The family eventually crossed the Mississippi River in a rowboat and made their way to Quincy in the free state of Illinois.

Tolton’s family had already been baptized Catholic while in Missouri, and Martha tried to find a welcoming church community for her children, but for years Augustus endured ridicule and humiliation in Quincy’s parishes and schools. The Toltons finally found a welcome at St. Peter Parish in town.

At the age of 16, Augustus felt called to the priesthood, but he was denied acceptance by every Catholic seminary in the country. Still, he did not let that deter him from his call. Instead, with the help of two Quincy priests and Catholic benefactors, he worked for the next 10 years in tobacco factories and other jobs, until he was able to save enough money to travel to Rome to attend a seminary there.

For the next six years he studied to become a missionary priest, with the understanding that he would be sent to minister in Africa, but God had other plans. On the night before his ordination in 1886, Cardinal Giovanni Simeoni, the prefect of the Vatican Congregation for the Propagation of the Faith, summoned Tolton to tell him that he was being sent back to America. The cardinal said, “America has been called the most enlightened nation; we will see if it deserves that honor. If America has never seen a Black priest, it has to see one now.”

Tolton was assigned to St. Joseph Parish in Quincy, and although he won the hearts of young and old alike, he also endured humiliation, isolation, and condemnation from fellow priests who could not accept him. They called him the “n—-r priest,” and when a large number of white Catholics attended his parish, the jealous pastor of a neighboring parish told him he should not allow white people in his church. Tolton responded, “We open the doors to the church. We do not tell people to go out; we tell them to go into the church.”

Later he was invited to come to Chicago to minister to the emerging Black Catholic community, for whom he developed and built St. Monica’s Parish. His remaining years there were spent ministering to the poor, caring for the sick and hungry, and working tirelessly to raise funds for the community. In fact, St. Katharine Drexel (foundress of the Blessed Sacrament Sisters and Xavier University of Louisiana) was one of his benefactors.

Tolton’s health suffered as a result of his tireless work, and in 1897, at the age of 43, he died from complications of heatstroke while returning home from a pastoral retreat.

Tolton’s life sheds light on the complex nature of African American participation and acceptance in the U.S. Catholic Church. While I was raised in the church and attended Catholic schools, it was not until I became an adult that I was introduced to the contributions of Black Catholics such as Tolton; St. Monica, the African mother of St. Augustine; Venerable Henriette DeLille, cofounder of the Sisters of the Holy Family; Venerable Pierre Toussaint, the former slave who founded charities in New York; or Mother Mary Elizabeth Lange, the first superior of the Oblate Sisters of Providence.

Learning about Tolton’s life of perseverance in the midst of insurmountable odds has helped me to understand my own struggles to become a minister in the Catholic Church. As an African American lay Catholic woman, I too have found my vocational choice questioned, and access to full participation in the church has been challenging. I look to Tolton for inspiration. His dedication to daily prayer and the Eucharist during his formative years has shaped my own spiritual practices. He also helped me to see that a minister does not shy away from asking for help in times of struggle.

His dedication to his call and education caused me to look more closely at my own commitment to ongoing formation in ministry. His sense of hope in the midst of overwhelming challenges has guided me to “keep on keepin’ on” when despair appears to be knocking at my door. Finally, Tolton did not shy away from inviting all to worship God. As diverse communities of faith, we can learn from him what it means to open the doors to all peoples who wish to worship in spirit and in truth.

Today, as the director of the Augustus Tolton Pastoral Ministry Program at Catholic Theological Union, it is my responsibility to help my students recognize Tolton’s legacy and example.

In the midst of school closings, dwindling church populations, economic struggles, and increased violence in neighborhoods, those in the Black community who choose ministerial leadership offer, as Pope John Paul II in 1987 told Black Catholics in New Orleans, “eloquent witness to the power of the Holy Spirit accomplishing the work of spiritual freedom . . . [by] proclaiming God’s Kingdom to a world shackled by consumerism, mindless pleasure-seeking, and irresponsible individualism—shackles of the spirit which are even more destructive than the chains of physical slavery.”

C. Vanessa White is an assistant professor of spirituality and director of the Augustus Tolton Pastoral Ministry Program at Catholic Theological Union in Chicago.