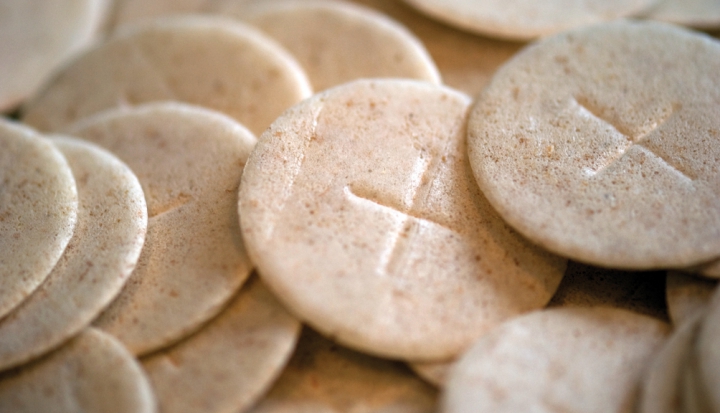 The real bread of the Eucharist has plenty to say about people starving while others eat $17 burgers.

Chicago has recently experienced an unholy attack on the Eucharist, at least in its presanctified form, if the news is to be believed. The sacrilege involved the unhappy pairing of a host (unconsecrated) and a hamburger at Kuma’s Corner, a trendy grill on the Second City’s Northwest Side. The 10-ounce goat-and-beef “Ghost Burger” was created in honor of a heavy metal band (as all of Kuma’s creations are) whose lead singer appears dressed as a Roman Catholic cardinal. Thus a red wine reduction and communion wafer made sense as condiments to the band Ghost B.C.’s onstage antics.

Objection to Kuma’s $17 burger came mostly from Facebook: “What was being presented was not as offensive to me as much to my God and my savior,” said Keir Norwell, according to the Chicago Tribune. Kuma’s Luke Tobias turned the controversy in a decidedly theological direction by pointing out that “the communion wafer is unconsecrated, so until that happens, it’s really just a cracker.”

Kuma’s did attempt to mend fences, however, by making its monthly charitable donation of $1,500 payable to Catholic Charities—which promptly returned it, urging Kuma’s Corner to “discontinue selling a burger that disrespects [the Catholic] faith and the faith of all Christians,” according to local news website dnainfo.com.

Lost in the furor surrounding whether the Ghost Burger insulted Catholics or Christ’s body was the simple fact that the burger, like many others, is served on a pretzel bun—that is, bread. Yet no one seemed to make the connection between a specialty bread created for religious services and a specialty bread made for a $17 hamburger. That’s too bad, because the real tragedy is not that someone put a host on a hamburger; it’s that we have allowed something called a “host” to take the place of bread in our celebration of the Eucharist.

That mistake has allowed us to forget that the Eucharist is about the actual food that we eat every day, including the bread that pops up in the morning from our toasters and provides the base for the peanut butter sandwiches our children eat.

That’s not to say that the Eucharist doesn’t have something to say about a $17 hamburger in a world in which 2 billion people live on $2 a day; it just doesn’t have anything to do with a poorly placed host. On the contrary, the real bread of the Eucharist has a lot to say about a system that apportions food in such a way that a very few enjoy “slowly braised goat shoulder, aged white cheddar cheese, and Ghost chile aioli”—plus wafer and red wine reduction—while just blocks away someone is rooting through the alley garbage for a daily meal.

The real bread of the Eucharist might also have something to say about a bill that passed the U.S. House of Representatives in September cutting $40 billion from food stamps over 10 years—an insult to the body of Christ made flesh in the bodies of poor hungry people if ever there was one.

Yet as long as what passes for “bread” in the Eucharist is, as Tobias points out, “just a cracker,” the tie between the Eucharist and our actual daily food will remain tenuous at best, and the connection between the “Eucharist and the hunger of the world,” the stirring title of a book by the late Catholic liturgist Monika Hellwig, may never be realized.

If the Eucharist is, among other things, the pattern of how all meals are shared in the reign of God—everyone receiving what they need, with enough to satisfy all who come, and some left over—then the eucharistic food we share must be recognizable as the same bread that graces our family tables rather than a specialty religious confection seen only at church on Sunday but never at Sunday dinner.

After all, it is the abuse of actual bread—when it is withheld from the poor, when it is hoarded, and when it is wasted—that offends the meaning of the Eucharist. So it is only actual bread that can be the sacrament of the gospel alternative, where Christ is known and all are fed in the breaking and sharing of a single loaf of (real) bread.