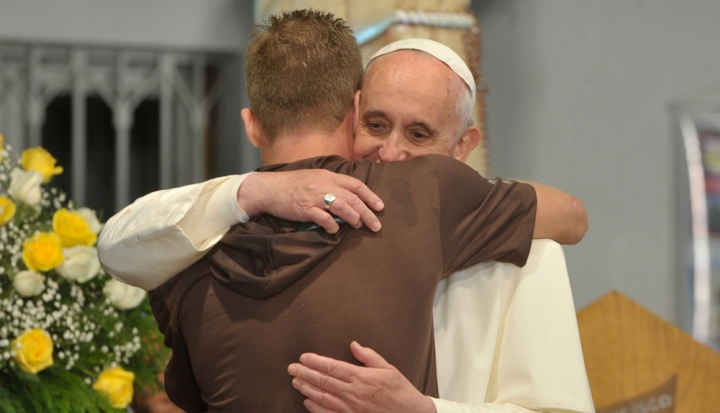 To the millennial generation, the new pontiff’s actions are speaking just as loud as his words.

She’s talking about Pope Francis, and no, that’s not irreverence she’s expressing, but something more along the lines of camaraderie. That’s because the new pontiff and all the coverage his acts of humility have been getting, have strong resonance with Caldwell. “It’s really refreshing to see him refocus on a facet of Catholicism that doesn’t get talked about,” she says referring the church’s tradition of charity and justice.

Caldwell, a member of the Jesuit Volunteer Corps, serves in one the nation’s poorest and most dangerous cities, Camden, New Jersey. She says that the pope’s message that Christians are called to be humble servants affirms her work and helps her to stay focused. “He’s a great example of living your faith,” she says.

“In my personal circle and friends, especially young people my age, we’re all excited about the new pope,” says Karina Anglada, 24. When Francis’ name was announced, she says her Facebook timeline lit up with status updates expressing hope for the future of the church. Granted, Anglada went to a Jesuit high school and admits that the fact Pope Francis is a Jesuit was one reason for the flurry of online activity.

But the buzz about the new pope probably also has to do with his behavior. Anglada and Caldwell can easily list the things they have been pleased to read about: Pope Francis trades papal throne for a simple chair; Pope Francis makes his own calls to cancel his newspaper subscription; Pope Francis keeps his simple black shoes; Pope Francis washes feet of women and prisoners, etc. They think it’s high time this side of the church gets some time in the limelight.

There’s an authenticity to his message, as well, a value young adults hold dear according to Kerry Cronin, Associate Director of the Lonergan Institute at Boston College. In the wake of the clergy sex abuse scandal, Cronin says some bishops are realizing they they need to “shut up and do good work.”

“That’s a really good model. That will be a draw for the millennial generation because they’re highly sensitive to hypocrisy,” Cronin says.

Rebecca Davis (not her real name), 31, thinks Pope Francis isn’t expressing a faux humility and has so far been impressed by profound actions, but her overall impression is “cautiously optimistic.”

Still, his emphasis on justice and service to the poor make her hopeful. “I think he’s definitely waking people up a bit and I think it’s in a good way.”

This is a web-only sidebar that accompanies “I hate to admit it: Why young adults are keeping their faith to themselves” which appeared in the September 2013 issue of U.S. Catholic (Vol. 78, No 9, pages 12-16).