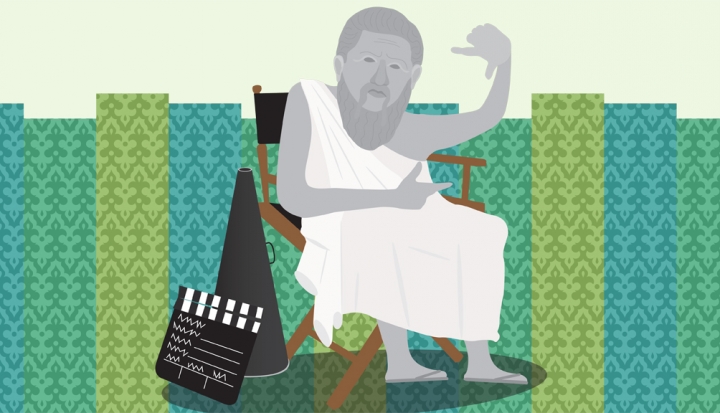 Summer blockbusters may seem like mindless entertainment, but two of this year’s big films offered viewers more to chew on than popcorn.

The ancient philosopher Plato (429–347 B.C.), the student of Socrates and teacher of Aristotle, had a busy summer this year at the movies. A case could be made for Plato’s descendants to receive royalties from both The Croods and Man of Steel, as both films rely heavily on Plato’s The Republic for the story line.

If you know Western philosophy, you will recognize Plato’s allegories of “The Cave” and “The Line” in The Croods. If you know how to read, you will see Clark Kent/Superman in Man of Steel reading a book with Plato’s name on the cover in the school yard bully scene and again in the car as he seeks to discover who he really is and what he is meant to do in the world.

Philosophy means “love of wisdom” and is concerned with reality, existence, knowledge, values and ethics, the mind, reason, and language. The Republic is about these topics as well as politics, the governance of the city and state, and the characteristics of his proposed ideal leader. But the first thing Plato had to do was to teach and convince the people (i.e. men) of his time to use their heads, to think and reflect, to trust their own critical abilities, to move from the cave of fear to the light of day and to really live. He attempted to do this through his allegories.

With The Croods we have the story of a family, beings living on the line between preconsciousness and personhood, and their encounter with a “philosopher king,” Guy, who would show them the light of truth and reality. If nothing else, The Croods is a firm endorsement of a liberal arts education, because if you didn’t know about Plato, The Croods would have been just another disposable silly movie for kids with a pet sloth to make them laugh. I could not have been more pleased to realize that it was more than just entertainment. It’s about being aware of the world around you, reflecting on the marvels of human invention, and discovering the value of family, trust, and questioning the status quo.

Movies about philosophers, or inspired by a particular philosophy or philosophical questions and propositions, are nothing new. The genre-bending sci-fi trilogy The Matrix tests all areas that concern philosophy, stemming from the question French philosopher René Descartes (1596–1650) asked: Is it all real or just an illusion?

Groundhog Day could be taken straight from the mind of Greek stoic philosopher Epictetus (55–135), who wondered about the human person, free will, and fate. German 19th-century philosopher Friedrich Nietzsche is the father of nihilism, the belief that every moral choice has the same value, or better, no value, so what a person chooses to do or not makes no difference at all, and neither do the consequences. Recall the long-running television show Seinfeld that called itself “a show about nothing.” The implications for culture, as funny as the show was and continues to be in reruns, are worth critique and reflection.

For a summer popcorn extravaganza, Man of Steel is imbued with themes from Plato’s The Republic. For example, Krypton’s political society is self-destructing through its very efforts to sustain itself. General Zod kills the benevolent leader, the “philosopher king” Jor-El, because he and his wife have a child the natural way while the rest of the population is controlled through artificial reproduction. Citizens of Krypton consider themselves people but have chosen eugenics to continue their species.

When sexuality and intimacy are removed from natural human interaction, the very core of personhood is up for grabs for both men and women, as is evident in the characters of Zod and Faora, Zod’s second in command. They have a goal to preserve their state and their planet, but their humanity has been diminished to the point where empathy has disappeared.

Evidence of nihilism in this new Superman franchise is worth watching for, especially since Superman (the superhero of DC Comics, now at age 75), for the first time in film or television, kills someone. This was very disappointing to me, though I am told he kills in the comic book series. The extended violence—and lack of showing its consequences by removing the sight of blood—fractures the image of Plato’s virtuous superhero persona, despite efforts to baptize the film with Christian elements.

As for Superman in Man of Steel, will he become the “philosopher king” of the United States and by extension, the world? Plato’s ideal society was not a democratic one. The prominence of the military in the film—and the U.S. military assistance in making the film—over a democratic government makes me wonder if this is just convenient for the filmmakers or if the writers are actually going somewhere with Plato’s and others’ philosophical ideas for the inevitable sequels. I would hope they would reinforce Superman’s virtues over his physical abilities rather than conflating them, and that they will diminish the role of the U.S. military as Superman’s partner, especially in action on U.S. soil.

Finally, the filmmakers would do well to emphasize Superman’s interest in caring for the poor and the marginalized in ways that resolve conflict without violence and killing. If they do, then the films will be worthy of being marketed to a Christian audience. Anything short of this is just another excuse for popcorn.