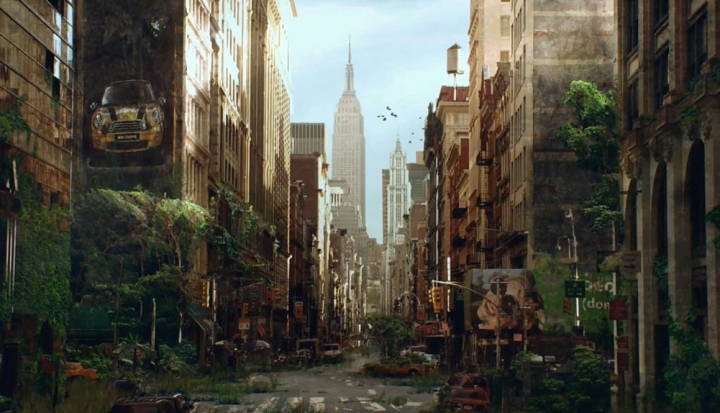 Yet another bout of end-times hysteria is sweeping the nation, or at least our flat screen TVs. But this time there’s a twist.

In recent years the earth has survived several scrapes with the end-times. First there was the Christian radio evangelist who predicted that the rapture would occur on May 21, 2011. Then, for the post-Christian types, there was the claim, allegedly based on the ancient Mayan calendar, that the world would end December 21, 2012. Despite all that, we’re still here. But we haven’t lost our appetite for apocalypse.

One of the most popular new dramas on broadcast TV this year has been Revolution, which depicts a world in which all electricity has gone off, and stayed off, for 12 years and counting. Produced by J. J. Abrams (who made the long-running cult favorite Lost), Revolution focuses on the former United States, which has devolved into a patchwork of fiefdoms at war and a rebel movement that aims to bring back the old republic.

Meanwhile, on the cable “reality” front, the National Geographic Channel’s most popular show is Doomsday Preppers, in which a weekly collection of actual citizens are shown preparing for whatever apocalyptic scenario has seized their fevered brains—from Abrams’ universal power outage to a currency collapse or a terrorist takeover.

Of course, apocalyptic expectation is nothing new. The first Christians expected the kingdom of God to arrive in their lifetimes. Rumors of apocalypse seem to be a natural by-product of the Judeo-Christian tradition’s linear view of history that sees all of time aiming toward a messianic fulfillment. Certainly bouts of end-times hysteria have erupted repeatedly throughout U.S. history. Not too long ago lots of otherwise sane and normal people really expected that every computer in the world would stop working on January 1, 2000.

Y2K may have passed with a whimper, but September 11 and the looming likelihood of a climate catastrophe have since given plenty of inspiration for those inclined to expect the worst. And apocalyptic artworks have been a staple ever since. In addition to several upcoming end-time-themed releases, this spring saw the opening of both the post-apocalyptic Tom Cruise vehicle Oblivion and an apocalyptic parody, This is the End.

NBC’s Revolution seems to take much of its inspiration from The Hunger Games series of young adult novels and now films. Certainly Revolution has plenty of very attractive young people engaged in lots of choreographed hand-to-hand combat. Also the series’ central female character, Charlie (played by Tracy Spiridakos), is, like The Hunger Games’ Katniss Everdeen, a mean hand with a crossbow. Despite 12 years without electricity or modern personal care products, all these young people of the future are remarkably well-groomed as they go around in horse-drawn wagons waving their swords.

But this is TV, after all; and the real drama in the series turns out to be the moral crisis of a middle-aged character, Rachel Matheson (Elizabeth Mitchell), who must struggle with the choice between individual desire and the common good in the starkest of terms. Rachel triggered the worldwide blackout by unleashing electricity-absorbing nanites to keep her terminally ill son alive. She knows how to bring the power back, but for a dozen years she has watched her nation degenerate into a Hobbesian war of all against all. During the season, that precious son, now a teenager, was killed in combat. Finally Rachel had to acknowledge that his life had not been worth the damage done, and she set out on a journey of redemption aimed at restoring the juice.

The common good doesn’t come up much in Doomsday Preppers. For these folks it’s all about “me and mine.” Preppers have convinced themselves that some sort of natural, economic, or political disaster is imminent. So they devote their time, and sometimes their entire lives, to building bunkers, collecting weapons, and devising schemes to escape the doom awaiting the rest of us. In any episode of Preppers, you may meet a couple of guys who are convinced that the electromagnetic pulse from a nuc-
lear explosion will destroy the power grid. Or a man
who runs a barbecue joint and believes that a terror-ist occupation of the United States is a real danger.

Once you’ve accepted those far-fetched premises, it makes perfect sense to spend every spare moment doing target practice, or maybe mapping the sewer system under your town. Then you have to consider the fact that a social collapse could result in martial law and the confiscation of firearms, which means you’re going to need that catapult you’ve been working on. Or, as a last resort, you might want to bury a solid steel bunker, so your family can ride out the storm unscathed.

Back in the late 20th century, there was a spate of pop culture doomsday mongering—including the film Testament and the TV miniseries The Day After—prompted by what was then the very real threat of global nuclear war. But those tales of apocalypse, while they often placed typical families at the center of the drama, ultimately were not hymns to the primacy of kinship ties. They were cautionary tales meant to inspire a mass movement to turn back the threat of nuclear armageddon.

The preppers are right that we have some pretty apocalyptic problems today, with climate change topping the list. But we can’t save ourselves from that, or any other looming disaster, as individuals, or even as families. We could use some stories that inspire us to tackle our crises together, in solidarity. Maybe that’s where Revolution is headed in its next season. We can always hope. Can’t we?