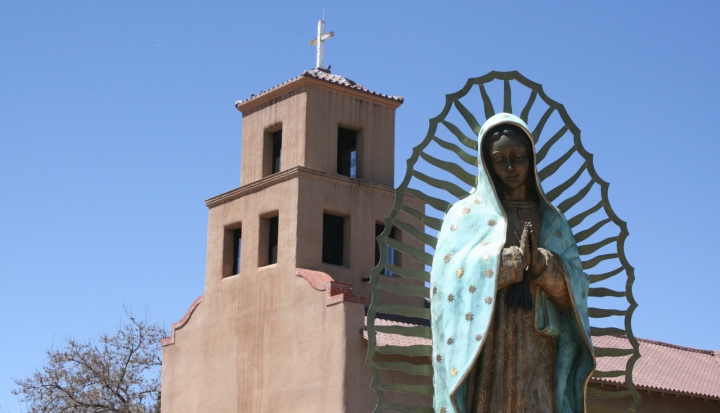 Every community within the church celebrates different traditions and customs that stem from a variety of cultures, time periods, and countries. These traditions serve to enrich and deepen the faith life of an individual or a community. The feast day of Our Lady of Guadalupe (December 12) provides the perfect opportunity to explore the popular traditions of one such faith community: Latino Catholics.

In this web-exclusive excerpt from his interview with U.S. Catholic (published in August 2013), Roberto Goizueta, professor of Catholic theology at Boston College and the author of Christ Our Companion (Orbis) helps to explain the significance and deep spiritual meaning of popular Latino Catholic devotions.

What makes the story of Our Lady of Guadalupe so powerful?

The story of Guadalupe is also the story of an indigenous man, Juan Diego, who at the beginning tells Guadalupe, “I am a nobody.” He literally uses the term “piece of dung” or excrement. “You’re asking me to go to the bishop in Mexico City and tell him to build you a chapel on this hill, Tepeyac?” It sounds crazy to him. “I’m a nobody. Find somebody else.”

But, during the series of conversations he has with her, she continually refers to him as “my most beloved Juan Diego, my dear child.” And as a result, he gradually goes from being somebody who experienced himself as having no dignity to, finally, being eager to go to the bishop. “Let me go. I want to go.”

Not only that, but at a certain point in the story—when Guadalupe tells him that she needs to see him—he even avoids seeing her because his uncle is sick and he has to go look for a priest to give his uncle the last rites. He tries to sneak around her and, in fact, disobeys her. But that very act of disobedience in that story is also a reflection of how he’s gone from seeing himself as a nobody to seeing himself as somebody who is now even able to go against the wishes of the Virgin.

It is the story of somebody who goes from being an object of other people’s actions to somebody who is now capable of being the subject of his own actions and his own life. Why does that happen? The only reason is the relationship he develops with Guadalupe. It’s through that relationship, in which he comes to see himself as lovable and loved, that he becomes a self, an agent, a person.

I want to raise my children in such a way that they will have the strong sense of self to eventually disagree with me, and maybe even reject some of what I have taught them. But that can only happen to the extent that they’ve been raised in strong relationships of love. And also, by the way, to have the sense of self and strength that they don’t have to be beholden to their peers and to the culture and to the larger society.

I want them to be able to say, “No, that’s not what I think.” So that relationships are not limitations on freedom, but at least normally and ideally, are the source of real freedom.

On the feast day of Our Lady of Guadalupe, Latinos gather in huge crowds for the Mañanitas at churches and Guadalupe shrines. Why are they coming, what’s drawing them?

Guadalupe is a very special and unique kind of devotion. As Virgil Elizondo writes, there would be no Mexican people without Guadalupe. This story of Guadalupe and Juan Diego emerges at the moment of deepest distress and despair among the Aztecs in the 16th century, when they had been exterminated by the Spaniards. It gives hope to the people that, yes, God is with us. It not only makes possible the evangelization of Mexico, but it also makes possible the birth of the Mexican nation and the Mexican people, out of the ashes of despair and death. So Guadalupe is not only a symbol of a religious identity; being Mexican is almost synonymous with being Guadalupan.

You go into any Mexican community or neighborhood, in the United States or in Mexico, you see images of Guadalupe all over the place, regardless of how particularly religious somebody may be or not. I think part of that is that Guadalupe’s much more than a Marian apparition. It is that, but it’s also an encounter between the Virgin and Juan Diego.

Latino popular Catholicism is primarily rooted in the home, rather than in the parish. How is that significant?

It’s very important for a number of reasons. First, there are historical reasons: There just were not enough priests in Latin America. So most Catholics in Latin America, particularly in rural areas, would have to go weeks and weeks, if not months, without seeing a priest.

If you’re going to have a Catholic faith life in that context, you have to develop it on your own. So all these devotions arise, often led by the abuelitas, the grandmothers in the families. In many ways the grandmothers, rather than the priests, are the primary ministers who look after the spiritual well-being of the people.

Often, there would be a home altar, which would be the center of the religious life of the family and of the communities. It’s essentially a life of faith where the leadership is lay and predominantly women.

Now when that kind of Catholicism comes to the United States, where we have a church which does identify Catholic faith life primarily with the parish, there can be a tendency for Latino Catholics to become invisible, if they don’t participate actively in a parish. The pastor might think, “Oh, I don’t have many Latinos in my neighborhood or in my parish community because I don’t see them in the pews.” Or even more so, “I don’t see them registered in the parish registry.” And yet there may be very active Latino Catholics in the neighborhood and in the parish community. They just don’t necessarily come to the parish.

In that context, the challenge becomes to then begin to reach out to Latino Catholics, to draw them into the parish, to go knocking on doors, to meet them. So that if you’re going to have a via crucis or if you’re going to have a parish reception, you do more than simply put a poster up in your parish vestibule. You actually go out and knock on doors and meet the community.

It’s something, by the way, that many Pentecostal and evangelical churches have been very successful at doing. But the Catholic Church, because we’re not accustomed to doing that, we’re accustomed to people coming to the parish, we don’t do that very well.

When European Catholics came to this country, their popular devotions, their devotional life, and their statues were perceived by the dominant Christian culture in this country as signs of an immature, infantile, materialistic faith. So in order to become integrated and to assimilate into society, they had to get rid of those. When I talk to some of my Irish Catholic students about Sacred Heart devotions or novenas, they don’t even know what I’m talking about.

Then along come the Latinos with devotions that look a lot like those, and now people are supposed to accept them and see them as valuable, as reflecting a spiritual wisdom? Even though they had to get rid of those in order to become part of this modern, mature Christianity? There’s a real conflict there—how to value this way of being Catholic, when people may have been led to see these faith expressions as somehow less mature or less sophisticated than more abstract, conceptual, or rational understandings of faith.

But there is a sacramental quality to these practices and celebrations—sacramental in the literal sense of the supernatural being made present in and through the natural. It is a religiosity that is very physical, that appeals to all the senses and that makes Christ, that makes God present in our lives in a very concrete way.

It’s not an abstract kind of religiosity that takes place from the neck up, but rather involves the participation of the entire person, whether it’s through processions, through singing, or through physical gestures like kissing the crucifix. There is a physicality to it which, as the notion of sacrament implies, is essential, we believe, to the way in which God is revealed in the world. It’s implicit in the very notion of incarnation. 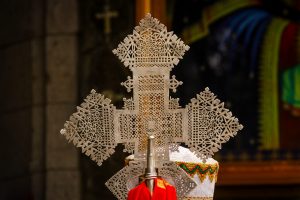