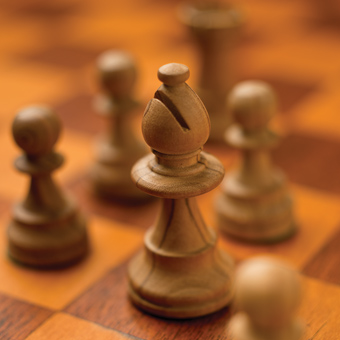 Moving a bishop should be more than an ecclesiastical game of chess.

Climbing the corporate ladder in our business-driven culture is generally applauded. Who doesn’t want the corner office, the big salary, and the perks of joining the true “company men” (who are still usually men, after all)? Staying in the same job or with the same company for too long can suggest a lack of ambition, and it certainly doesn’t improve one’s marketability.

So influential is this supremely American and capitalist value that it may be creeping even into the church. Consider, for instance, the recent move of Bishop Salvatore Cordileone from “lowly” Oakland, California to his new post across the bay as archbishop of San Francisco. A number of observers have speculated about whether his ecclesiastical “ascent” may have been fueled by his outspoken opposition to same-sex marriage in California, and specifically his support of Proposition 8, the 2008 voter initiative that overturned a California Supreme Court decision that legalized such unions.

“Cordileone was the first to step up to the plate,” said Charles LiMandri of the Freedom of Conscience Defense Fund in the Los Angeles Times. “That’s why his career has skyrocketed.” LiMandri worked closely with Cordileone on the Proposition 8 campaign.

Cordileone’s path is not unusual; his predecessor in Oakland moved on to become archbishop of Detroit. And in March Bishop William Lori, soon after being named chair of the bishops’ committee for the defense of religious liberty, left Bridgeport, Connecticut to become archbishop of Baltimore, regarded as one of the country’s premier sees.

Many will say that moving bishops in this way is nothing new; some might even argue that a bishop needs a “training diocese” before he can manage a large or influential see. Indeed, every bishop of a large American see has been a bishop in at least one other place, sometimes two.

In contrast, bishops in the ancient church were considered married to their dioceses (rather than being seen as their corporate heads). The ancient church recognized the corrupting possibility of careerism among bishops, which is why canon 15 of the Council of Nicaea forbade the transfer of bishops from one city to the next.

A bishop of that council, Ossius of Cordoba, noted that no bishop ever sought “to be translated from a larger city to a smaller one,” so it was obvious “that such persons are inflamed with excessive covetousness and are only serving ambition in order to have the repute of possessing greater authority.”

The possible ambition of bishops aside, it is obvious that at least in some cases dioceses are being used as career stepping-stones, a practice abetted by the fact that the members of these local churches have no real input—much less an actual say—on who will lead them as bishop. Voices including conservative stalwart George Weigel have complained about the shadowy and ingrown nature of the selection process.

As the appointment of a new archbishop of Chicago nears, members of the lay group Voice of the Faithful are trying to exercise their rights under canon 212 to “make known their needs, especially their spiritual needs, and their wishes to the pastors of the church” by collecting input from Chicagoans through two websites about what they might like to see in a new archbishop. And ACTA Publications has been putting together a book of essays by Chicago Catholics to be presented to the papal nuncio that will explain what kind of a diocese Chicago is and what it needs from a new archbishop.

Many will dismiss such efforts as futile, but they keep front and center the question of how bishops are chosen and for what reason. No diocese deserves to be used, in the words of a member of the Diocese of Oakland, “as a Triple-A farm team for bishops who are clearly heading elsewhere.” Perhaps we need an addendum to the ordination liturgy for a bishop: “till death do us part.”