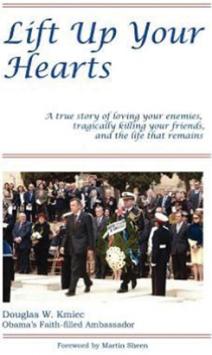 And yet with all of his considerable accomplishments, I am sure that Kmiec would trade all of them to get back one minute of his life—1:37 p.m. on August 25, 2010. That was when the car that Kmiec was driving along a California canyon road tumbled down a hill, doing him serious injury, immediately killing his dear friend, Sister Mary Campbell, and causing injuries to his beloved mentor and friend, Msgr. John Sheridan, which would result in the monsignor’s death three weeks later.

Alas, the Lord does not allow us to make such bargains. We don’t get those loved ones back. All we can do is hold them in our hearts and go on with the life that is left to us to live. Lift Up Your Hearts is Kmiec’s attempt to do that, and, generous man that he is, he has chosen to share that experience with us.

That is not to say that Sister Mary and Msgr. John are not very much alive in this book. They are fully alive in Kmiec’s reminiscences, his stories about them, his recounted conversations with them, and the life lessons that he learned from them. But before he gets to that, he begins, Job-like, questioning the Lord’s ways. Why did his friends have to die in an accident that he feels responsible for? What was God thinking?

This part of the book is compelling because we have all had those internal conversations with our God. Why can’t our faith defend us against evil? Why do good people suffer? Kmiec finds his answer in Msgr. John’s “theology of kindness,” a theology that he cites often in the book. “We can understand suffering only in terms of genuine love,” the monsignor wrote, “and true love is the gift of self. . . . If we can conceive of life as a continuous giving of self, we are on the way to understanding suffering as the moral adventure of love, an adventure culminating in God’s accepting us and uniting us to himself after the final pangs of death in our final act of self-giving.”

Lift Up Your Hearts also deals with Kmiec’s experience as the U.S. Ambassador to Malta. Malta is heavily Catholic, but it has Arab roots, and during Kmiec’s tenure it became the refugee point for Muslims fleeing the violence in Libya. It was the perfect place to carry out an interfaith diplomacy, as Kmiec was charged to do by President Obama. Unfortunately the denizens of Washington saw it otherwise and came down on Kmiec, in an evaluation that was publicly leaked, for putting too much faith into his job. Principled man that he is, Kmiec tendered his resignation.

There is a wisp of sadness in the book that the president did not rally to his support, but, having grown up in a political family in Chicago, Kmiec also understands that “politics ain’t bean bag” as Chicago’s Mr. Dooley famously said. Sometimes those whom we respect in politics make decisions that we don’t understand for reasons that we don’t understand. Which is why, as this book makes abundantly clear, neither politics nor politicians nor anything in this world is the object of our faith. Only the Lord is. And Kmiec came to know the Lord better and more truly through his friendship with Sister Mary and Msgr. John.

There are few, if any, recent books that can compare with the journey of faith depicted in Lift Up Your Hearts. It is a journey worth traveling along, with Doug and Mary and John.