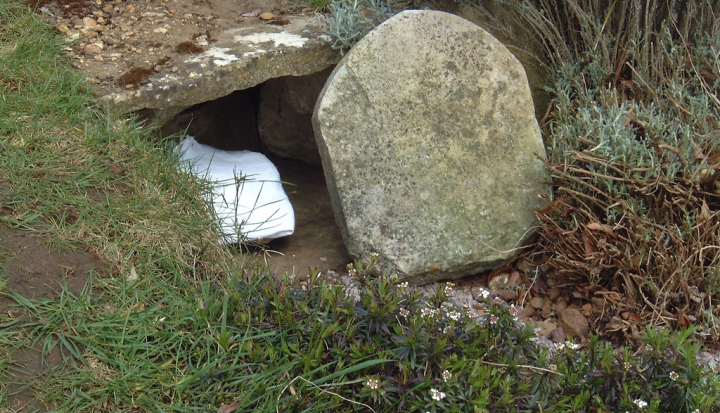 Though the cross reigns over Good Friday, Easter's mystery needs a symbol of its own.

I don't usually think of Jesus' crucifixion when passing the sweets table, but there it was: A big rich dark chocolate cake adorned with white sugary latticework in the shape of-you guessed it-a cross.

It wasn't completely out of place, since I was at an ordination. But it brought to mind the perennial question of why, if you want to make something, anything, "Christian," all you have to do is slap a cross on it, and voila! I wonder if the Romans had any idea that their preferred instrument of torture would someday be imitated in cake frosting.

Actually, the early Christians might be a little surprised themselves. It took centuries for crosses to appear in places of worship, perhaps because the ancient church still had firsthand experience of their brutal purpose. Once the memory of a fellow Christian nailed to a cross faded, believers felt more comfortable bringing one to church. Since then Christian churches of almost every stripe have a cross. Catholic schoolchildren of a certain generation were even taught to draw one at the top of every sheet of paper.

Unfortunately the ubiquity of the cross, for all its importance, focuses our faith almost exclusively on Jesus' torture and execution. His resurrection, which is the end point of the Good News, gets lost in the shadow of the cross-though death's defeat admittedly lacks an easily identified instrument as its apparent victory. Easter's transformation is a bit hard to illustrate, much less draw at the top of an essay.

But it does lead one to wonder why we haven't sought an image that captures our Easter faith more fully. Scripture provides a captivating yet ambiguous one: an open, empty tomb. In fact, the oldest story of Easter, from the gospel of Mark, lacks the angelic figures of Matthew and Luke and the mysterious gardener of John. All Mark gives us is an empty hole in the ground, from which the women who came to anoint Jesus flee in terror.

Perhaps that's one reason why the empty tomb never caught on. Unlike the cross, concrete in its shape and purpose and cruelty, the empty tomb is ambiguous, open to interpretation. Depending on your point of view, it is either a curiosity to be explored-who isn't tempted to enter a cave?-or a macabre reminder of our own inevitable death.

That is, after all, the truth of the grave, one that can be more personal than the cross. It's easy to let the cross be all about Jesus' death; none of us expect to die on one. And Jesus' death in the minds of many Christians is a one-time event, a special case with cosmic purpose, however understood.

But while the cross allows us to recall Jesus' historical passion and consider its saving purpose, we can easily remain safely in denial about our own mortality, and questions about the purpose of our own death can go unasked.

Even if we're unlikely to be tortured to death on a cross, we're all going to end up in a grave some day. Christian faith promises that we'll come back out eventually, but not until we follow Jesus down into the depths of the earth in our own "saving" death, regardless of the manner by which we go.

That is the mystery we celebrate in baptism, and why baptism in the ancient church was a lot more like a ritual drowning than an unthreatening trickle of water. St. Paul says it best: "Do you not know that all of us who have been baptized into Christ Jesus were baptized into his death?" (Rom. 6:3). Beyond scripture and sacrament, we experience that truth of faith more immediately and intensely when we place a loved one in the open ground and water the earth with our tears.

Considered in this light, an empty tomb on Easter Sunday might not merit the joy of even a single alleluia. But between the cross and a hole in the ground, I'll take the tomb. For me it better captures the pattern of our Christian lives-life, death, resurrection-acknowledging the inevitability of death as well as its inability to hold us forever. The life that awaits us is beyond our grasp, inspiring at least uncertainty if not apprehension, but also open to hopeful possibility.

"What no eye has seen, nor ear heard, nor the human heart conceived," says Paul, is "what God has prepared for those who love him" (1 Cor. 2:9). Easter's empty tomb points the way to the God who is making all things new.