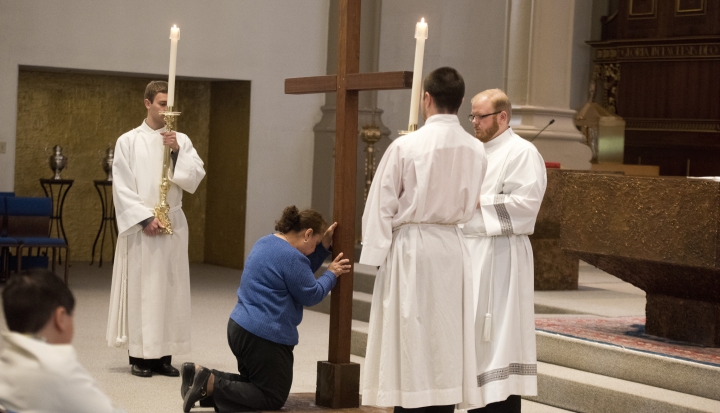 Those of us in our 60s and beyond remember something like this from our youthful Good Fridays: After what seemed like an eternity of Latin readings (mostly John’s account of the Passion), followed by another eternity (during which the interesting part was seeing if you could actually get both knees on the kneeler before the pastor semi-chanted, “Levate”), we got something more than words: a procession.

This involved the gradual unveiling of a crucifix (first the left arm, then the head, then the whole body), while the servers and the pastor moved from the back to the front, and while all of us were again down and up from the kneelers until this large crucifix was placed in the sanctuary.

Then there was a sudden multiplication of the clergy as they appeared with little crosses and tissues and stood here and there along the communion rail. We all came forward to kiss the corpus on one of these small crosses. Kiss. Wipe. Kiss. Wipe.

Undoubtedly, some parishes did this with far more of a sense for the power of this once-a-year gesture, but even the usual production-line approach could not entirely rob it of significance. To kiss this cross made a kind of climax to all of Lent. Few of us returned for the long liturgy on Holy Saturday morning, and Easter Sunday at church had already become more social than religious. That little kiss had to bear a lot of liturgical weight.

This was Good Friday. We fasted as on all the weekdays of Lent, we abstained (as on all Fridays during the year), and we waited for Lent to end at some vague moment on Holy Saturday—maybe when the Easter foods were blessed and the fast broken. The Good Friday liturgy was usually tied vaguely in our minds to some hour-by-hour chronology as in the bestseller The Day Christ Died (HarperOne). Silence and prayer and “visits” were encouraged throughout the day.

In assemblies that have attended to the liturgical renewal of the Second Vatican Council, however, I have known Good Friday in a different way. I know it is not Lent, for Lent ended on Thursday night with the Mass of the Lord’s Supper, which begins the Triduum. I have experienced these three days as the core of our year, founded on communal fasting (a fasting of excitement and anticipation rather than of penance and sorrow) and prayer and keeping vigil.

We need all these before we gather on Saturday night and finally approach the font and then the table. Little by little some of our assemblies have been discovering that the hours between the assembly on Thursday night and that of Saturday night are marked by several other assemblies, small or large, each with its own task and beauty. The assembly of Friday afternoon or evening is central to these.

When we come for the solemn liturgy that includes the “veneration of the cross,” we have no entrance rite. The church has been gathered since last night, and we do not need rites to make us ready to hear Isaiah and the Letter to the Hebrews and John’s Passion. We’re assembled and ready.

We do the basic things: listening and pondering our scripture, then the lengthy intercessions that give us a sort of model for what all our interceding (at Sunday liturgy or at our bedtime prayer) is to be doing—that is, the church making the noises it was baptized to make and clamoring to a seemingly absent God about all the needs and troubles and suffering of the world.

What follows is done only this once in our year. I’m certain there are assemblies where coming to the cross is quick and efficient, one more piece of the liturgy stolen from the assembly to whom it belongs. But I also know that it can fully belong to all of us. After the cross is held high and we gaze and acknowledge that “this is the wood of the cross,” this one cross is placed or held where we can, one by one in procession, come to it. As on the previous night, we may choose to remove our shoes (actually part of the old pre-Vatican II rite). That is one gesture that needs no explaining.

It takes the time it takes. We’re fasting from food and from work and from entertainment and from distraction. For what should we hurry?

Each member of the assembly has their moment before the one cross (gone forever are the multiplication of clergy and their crosses and tissues). Some of us do one thing, some another. We bow. We kneel. Some embrace the cross; some kiss it. Others touch their head to the wood of the cross or take a young child to the cross. No hurry.

The assembly members sit or kneel or stand as long as it takes, and we sing the music of Good Friday. Some are mantra-like pieces in Latin and English, while others have Greek words. Some are spirituals that arose from people who knew this cross well; some are psalms whose words have from the beginning helped Christians to embrace the cross.

What I come forward to embrace and kiss is what John’s passion story says is the throne of the one who conquers death, never ceasing to be as much the tool of torture (think of Abu Ghraib prison and Guantanamo Bay) and the tool of execution (see a noose, an injection, an electric chair). Here I kiss what those waters of baptism proclaimed about the world, about ourselves, and about the surpassing love and peace of God. 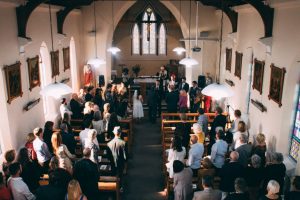 Ask an Apostle: Help! My kids are too noisy at Mass