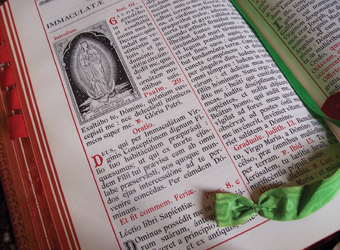 The new translation of the liturgy will speak volumes about the church that prays it.

November 28, 2010, the First Sunday of Advent, marks the beginning not only of a new liturgical year but a countdown to "welcoming the new Roman Missal," as the U.S. bishops' website calls its preparation program for the new translation of the Mass. Over the coming year English-speaking Catholics around the country will relearn prayers they have long been able to recite or sing by heart.

Why the change? Many reasons have been offered, but there is really only one: The directive of the Second Vatican Council's liturgy constitution that, in the reform of the liturgy, the "full and active participation by all the people is the aim to be considered before all else" has been replaced by the goal of translating Latin texts into the vernacular as literally as possible. How else can one understand the restoration of the archaic "And with your spirit" as a response to "The Lord be with you"?

Or consider the only change to the Holy, Holy: Where we now praise the "God of power and might," we will soon sing to the "God of hosts"—armies, not communion wafers. The expression translates sabaoth in the Sanctus, which is Hebrew, not Latin. But why choose the confusing hosts instead of the clearer armies? Perhaps, in this age of faith-driven violence, Catholics would recoil at praising the "God of armies," hence the amorphous hosts. Still, "God of power and might," both accurate and clear to the assembly, was judged too "loose" a translation of the "Latin."

These examples reflect only some of the changes to the people's parts. The prayers spoken by the presider, many now rendered as a single, long, complex sentence in English to reflect Latin sentence structure, will be exceedingly difficult to proclaim in a way that the assembly can understand.

I could certainly be accused of sour grapes here; I am a student and proponent of the liturgical reform of Vatican II and have never been a fan of the aims of the "reform the reform" crowd, whose critiques seem rooted in nostalgia for a liturgy that never existed outside a monastery.

But the real problem here is the replacement of the pastoral principle of Vatican II with an ideological one. Instead of seeking "that fully conscious and active participation in liturgical celebrations," which is the "right and duty" of the faithful "by reason of their baptism," the Roman authorities have instead insisted on a narrowly conceived "fidelity" to the Latin text. The resulting archaic translation once again makes the language of the liturgy alien to the common tongue of the faithful, as Latin was before it.

Proponents argue that this new "liturgical English" is more worthy of God's praise than common speech, but it will in effect make the Mass less directly connected to daily life. As our Sunday praise of God grows more remote from our weekday reality, the challenge of becoming the sacrament of God's kingdom in the contemporary world—one of the purposes of our Sunday liturgy—becomes less apparent.

In the end, I wonder if that is not the point of this rollback. A liturgical reform driven by the full, conscious, and active participation of the faithful has not surprisingly produced a church in which the faithful expect and exercise a full, conscious, and active role. Those who would prefer a more demure faithful are wise to remake the liturgy in such a way that withdraws it from the daily language of those who celebrate it. In such a Eucharist a passive and disenfranchised peasant church will—through priestly courtiers—"humbly implore" a remote and disinterested God, that he may, "with a serene and kindly countenance," deign to hear us.