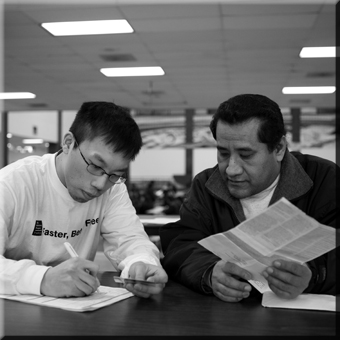 Nobody likes to do taxes. That includes James McLaughlin, a Chicago-based attorney with the firm Kirkland & Ellis.

But there's an upside to the process, especially when you're doing those taxes gratis for people who need assistance with the complicated forms but can't afford it.

"When you tell someone he's getting a refund of $3,000, he gives you a smile that lights up the sky," McLaughlin, 31, says. "It's a wonderful thing to be able to deliver news like that."

From his days as a young Catholic, McLaughlin got the message on the importance of service to the community. While studying for his Confirmation, he volunteered at a hospital. The experience was both uplifting and rewarding, teaching the teen a lesson that would stay with him through adulthood.

In 2002 one of McLaughlin's former classmates from Northwestern Law School invited him to a meeting for Ladder Up, a nonprofit organization that helps clients deal with financial solutions to lift them out of poverty. The group seeks out professionals in the legal and financial world to lend their expertise and knowledge of programs that specifically deal with money and budget issues.

In one session, McLaughlin was hooked. He had been looking for the right organization to volunteer with, and this appealed to him immediately.

"I like the idea of putting my brain to work on a volunteer project," he says. "I wasn't particularly interested in tax work, but it's something I do understand."

Also, as an attorney, McLaughlin has represented clients whose cases drag on in the court system for years. With Ladder Up's TAP (Tax Assistance Program) and LIFT (Life Improving Financial Skills), which helps clients secure financial aid for college, he knew he would see more instant gratification.

Another benefit to the group: He works only during the tax season, from January to mid-April, generally volunteering one or two Saturdays a month at one of 30 TAP sites in the Chicago area. With his busy work schedule and other commitments he shares with his wife, a novelist, Ladder Up gives him an opportunity to set aside a certain time period every year for his volunteer service.

"Some projects demand more and more of your time, and people end up getting burned out and quitting altogether," he says. "This is very time-focused, and I know just what is expected of me and when."

McLaughlin is so enthused about Ladder Up that he and another attorney have recruited nearly 80 other lawyers, including from his own law firm, for the organization. They're part of a network of volunteers that has returned $147 million to some 84,000 families since the group's founding in 1994.

"I think if God gives you certain skills and talents, you should find ways to use them to help others," he says. "Working in a soup kitchen is noble, but for me, it wasn't the best use of what I could offer."

Image: Photo courtesy of Ladder Up

Next: Derek Eisel protects the environment.