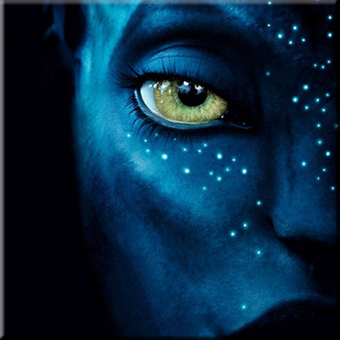 In 1929 Al Jolson told audiences of The Jazz Singer that they hadn’t heard (or seen) nothin’ yet, and he was right. They hadn’t seen Judy Garland croon and dance down that dazzling yellow brick road to find The Wizard of Oz. They hadn’t shuddered as the earth and sky trembled and quaked when God (or Cecil B. DeMille) gave Charlton Heston The Ten Commandments.

They hadn’t shaken, rattled, and rolled through hyperspace with Hans Solo and Luke Skywalker in Star Wars. And, if the current batch of fans and critics are right, they hadn’t fallen through the rabbit hole into James Cameron’s 3D intergalactic rainforest, a place so luminescent and magical that it makes Oz look like Topeka.

Like the crew of Star Trek and Hollywood’s biggest filmmakers, Cameron wanted “to boldly go where no one has gone before,” bringing his stunned and enchanted audiences into yet another dimension of the never-never land that is the movies. In two and a half hours of cinematic adventure that splashed every one of the 128 crayons in his digital coloring box across an IMAX-sized screen, Cameron lit up our imagination and showered us with shock and awe. For most viewers he had us in the landing bay, and then just kept blowing our minds with breath-stopping vistas and heart-stopping rides through a world neither Walt Disney nor Timothy Leary ever imagined.

Still, for all its kaleidoscopic wonder and often gleeful romping through the rainforest, Cameron’s mythic tale of the hero’s journey has a mournful resonance, pointing beyond the magical land of Pandora and the lovely blue-skinned Na’vi people to a darker, more contemporary reality.

Cameron’s 22nd century hero, Jake Sully (Sam Worthington) is a paraplegic ex-Marine wounded in one of America’s unending wars against indigenous insurgents. In Cameron’s dark vision we are still fighting the war on terror 130 years from now, mostly in places that have oil; and we are still sending off brave young men and women to be killed and wounded and to come home without limbs or hope. Some things, it seems, do not change.

In Avatar young Jake joins a military industrial mission to the planet Pandora, where corporate interests back on Earth hope to mine the invaluable mineral unobtainium (a uranium-like fuel to supply humanity’s insatiable appetite for energy). Unfortunately there are peaceful but stubborn natives living on top of the largest deposit of this precious mineral, and the locals have no interest in moving from their sacred site or selling out for the basket of trinkets and development aid offered by the invading Earthlings.

To assist his new masters, Jake infiltrates the locals — a friendly blue-skinned tribe of 12-foot hunter gatherers living in symphonic harmony with their rainforest planet — by taking on the genetically grown body of an Avatar that walks, talks, and rides winged steeds like a homegrown Na’vi. But while smuggling out the Na’vi’s defense secrets to Colonel Quaritch (Stephen Lang) and his merry band of corporate-hired mercenaries, Jake falls in love with the Na’vi princess and becomes a full-blood brother of the tribe, forcing him to take sides with the so-called terrorists and insurgents and take up arms (or bow and dragon) against Quaritch and his armada of Armageddon-bearing gunships.

The similarities between Cameron’s tale and our current national crises are numerous and painful.

In Avatar American military and corporate interests have come to wage war against a foreign and indigenous people who just happen to be sitting on top of the richest supply of energy in the galaxy. Since Jimmy Carter’s presidency our foreign policy has been focused on the Middle East and committed to securing an unfettered supply of oil from the region. To that end we have waged three wars and spent trillions of dollars in the name of national defense. And during our wars in Iraq and Afghanistan, major corporations such as Haliburton made obscene profits and exercised unchecked influence in the corridors of government power.

In Avatar the war is being waged by ex-military mercenaries working for multinational corporations with massive federal contracts and limitless influence on government policy. In our war in Iraq, our government hired 20,000 “private military personnel,” a much higher proportion of mercenaries than ever before. Many of these ex-soldiers operated outside of any law, doing their corporate master’s bidding without any accountability to the U.S. or Iraqi government.

In Avatar invading American military and corporate forces have overwhelming might, capable of bringing limitless pain and suffering to the primitive locals who resist. But in trying to seize Pandora’s treasure, they find (like the box in Greek mythology) they have unleashed a whirlwind of chaos and suffering upon themselves. So too in Iraq, and now in Afghanistan, American hubris has found that the price of war against local insurgents has been costly beyond our wildest imagination. More than eight years in Afghanistan, and seven years in Iraq, and can anyone say that victory is anywhere in sight, or that we have won the prize we sought?

And in Avatar Quaritch and his mercenaries have waged war against the land itself, attacking the Na’vi’s sacred sites and scorching the earth with their weapons. How much has our global quest for energy wrecked havoc on the land and destroyed habitats and species? How many of Iraq’s most ancient sites and this ancient civilization’s artistic treasures were destroyed or lost in our war for oil?

James Cameron has made titanic entertainment in Avatar, providing audiences with a gee-whiz ride to the farthest edges of our imagination. But he also has, not so subtly, told us a disturbing tale in which we are not the heroes, but the villains, and invited us to see our own national military and corporate misadventures in far and distant places in another, darker light. If we do not wish to be sending off young Marines to be wounded or killed in wars for oil or unobtainium in 130 years, we need to change course now.

5 children’s Bibles that stand above the rest