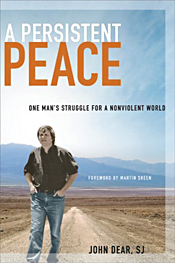 Chapters 1-6: A process of conversion

John Dear is a rich and self-centered "frat boy" when he begins college. But certain courses, experiences, and crises call his whole life into question. Over the next few years he becomes convinced that he must become a Jesuit priest. The conversion that began in college is strongly confirmed and focused when John goes on pilgrimage to the Holy Land. He states that his entire life as a Jesuit has flowed out of an event that happened to him on the Mount of the Beatitudes.

What kind of conversion experiences have happened to you? When did you first get an inkling that your life was about to change or that you needed to set out on a whole new course? What forms of confirmation, if any, have you received since then? Can you point to particular events or conversations that literally changed your life's direction?

The Society of Jesus has a distinctive and rigorous program for personal and spiritual formation. John's relationship to this program has its ups and downs. During these early years as a Jesuit-in-the-making, John learns some hard lessons, but his insight-and sense of mission-grow by leaps and bounds.

How do you feel about "programs" for spiritual formation? Are you attracted to the idea of intensive times for prayer and academic study, or does your spiritual development seem to thrive in different circumstances? John and his fellow Jesuits participated in "experiments" of ministry. What kinds of spiritual experiments have you tried, and what were the results? What roles do other people play in your personal spiritual growth?

John's experiences with the people of El Salvador and the Jesuits serving them force him to look even more closely at how the United States' actions in the world affects the poor and the oppressed. During the mid to late 1980s, his dedication to peace brings him into conflict with government and military entities again and again.

How has your understanding developed in regard to the United States' participation on global fronts? What is your response to John Dear's insistent anti-war convictions? What experiences have you had outside of this country that have influenced the way you think about Jesus' commands to love both neighbors and enemies?

Chapters 24-33: A consistent ethic of life

John becomes an advocate for death-row inmates, even bringing Mother Teresa's influence to these situations. And then he commits his most dangerous act of civil disobedience by hammering on nuclear weapons. This time he spends several months in jail with others who were part of the action. After serving his time, he lands in the Sacred Heart Center of inner-city Richmond, where his vision for peace is applied day by day to the lives of individuals in need, from struggling single moms to the homeless community. No matter where he is, John discovers that the peace of God's kingdom is meant to transform every life and situation.

What is the consistent spiritual conviction of your life-the topic about which you continue to be passionate? How has this passion shaped your life, and how have real events and people shaped your passion? Where have you encountered danger as a result of following your convictions? What kinds of situations have helped you better understand those convictions?

From the late 1990s to the present, John Dear has traveled the world to investigate situations and proclaim the truth about peace and justice-whether in Northern Ireland, Palestine, Iraq, or the Southwest United States. Because he spoke out in criticism of the church, he was sent away from New York to the poverty-stricken desert communities of New Mexico. There he has served as pastor for some of the poorest people in this country. At the same time he's used the opportunity to challenge the nuclear weapons research and industry at nearby Los Alamos. Although John has seen many good results of his peace work, he realizes, year after year, how costly it is to speak and act for peace.

What do you see as your specific role in bringing about the kingdom of God in this world? Where have your convictions taken you? What has it cost you to be Christ's love to the world? Regardless of your political opinions or your views about peacemaking, how has John Dear's story affected you overall? What has been most inspiring about it, or the most troubling about it? Now that you've read his story, what do you understand about peacemaking that you didn't understand before?