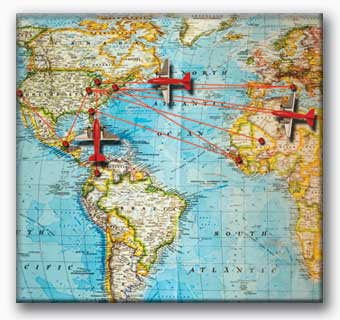 The shortage of priests has made some places in the United States “mission territory,” drawing clergy the world over to a parish near you.

One would expect to be nervous in his situation, but his warm, frequent smiles make him seem at ease this evening.

Father Paul Choorathottiyil, C.M., newly appointed associate pastor at Sacred Heart of Christ Catholic Church in Lakeville, Indiana, is attending his first meeting of the parish’s Rosary Society. This group of middle-aged and older women has already seen him a couple of times in church, and they have read his brief biography in the Sunday bulletin. But this is their first chance to learn more about him.

This seemingly humble man from across the globe, at least for the time being, will be leading their parish into its uncertain future. It quickly becomes clear this November 2007 night that they also are eager to make him feel welcome.

“Are you a good cook?” a woman asks after he thanks the group for the cooking utensils they had given him.

“I’m not,” he replies, sparking laughter around the long conference table.

“So donations will be accepted?” another woman asks, prompting more laughs. “If he’s starting to look a little thin, there might need to be some donations.”

“I’ll learn to cook. That’s what I’m learning now,” he says, appearing slightly embarrassed. “I’m really happy that people are there to help me.”

Bishop John D’Arcy of the Diocese of Fort Wayne-South Bend, Indiana recruited Choorathottiyil from Kerala, India to pastor this small rural parish, which had been without a priest of its own for four months. Choorathottiyil, 41, had trained seminarians in India for the past five years and served 12 years altogether as a Vincentian religious priest.

“I wouldn’t say I opted for it, but when I was asked, I agreed,” he says. “Basically our congregation is a missionary congregation. That means where we are asked to go, we are supposed to go. That is our lifestyle.”

Serving in the diocese under a 3-year agreement, which could be extended if things go well, Choorathottiyil is not alone in taking on such a mission. As its priest shortage worsens, the U.S. Catholic Church is increasingly filling empty rectories with foreign-born priests.

Some communities faced with rising parishioner-to-priest ratios have openly promoted recruitment of foreign-born priests as a strategy to mitigate the shortage as well as to serve growing immigrant parishes. International priests seem to be most common in the West, the South, and the New York City area, according to Dean Hoge, sociologist at American Catholic University in Washington and a noted expert on the priesthood. (Hoge died in September, 2008.)

About one third of newly ordained priests in 2008 were foreign-born, up from 22 percent in 1999, according to CARA data. Researchers don’t yet have any valid estimates of foreign-born priests in the United States, today or historically.

Bad medicine?
Father Richard McBrien, a professor of theology at the University of Notre Dame, says that the trend is real, even if it cannot be traced to any formal policy. He sees it as part of a pragmatic strategy of “certain conservative bishops who are desperate for more priests but who cannot even consider the possibility of married priests, much less women priests. It’s a Band-Aid approach to the priest shortage because it fails to address the systemic causes of the vocations crisis.”

Sister Christine Schenk, C.S.J., whose Cleveland-based reform group, FutureChurch, advocates optional celibacy for priests and ordination of women, says it’s unjust that so many priests come from developing countries, where they are needed far more. Priest-to-parishioner ratios in Europe and North America are about 1-to-1,400 but can be as high as 1 to 4,800 in Africa.

“It’s hard to avoid [the conclusion] that you’ve got the First World despoiling the resources of the developing world,” Schenk says.

In 2001 the Vatican’s Congregation for the Evangelization of Peoples issued Instructions on the Sending Abroad and Sojourn of Diocesan Priests from Mission Territories, noting the difficulty in evangelizing to non-Christians in Asia and Africa because so many native-born priests were pastoring in the United States.

“A community that fails to find the ministers it needs among its own people . . . can of course accept temporary help in difficulties or crises but must never deprive young churches of these priests who are often those with the best training,” wrote Cardinal Jozef Tomko, then the congregation’s prefect. “It is a matter of fairness and of ecclesial sense.”

“People will always give reasons why it’s OK in this situation, this exception. Many times the priests want to stay. It’s a better situation here.”

In their 2006 book International Priests in America: Challenges and Opportunities (Liturgical Press), Hoge and co-author Father Aniedi Okure, O.P., recount the nation’s long history of foreign-born priests. The flow of missionaries to the United States began in the 1800s and grew until the 1940s and 1950s, when it abated, they write.

Throughout much of the 20th century priests from Ireland and Germany were brought in to lead newly arrived immigrants from their own countries. But today priests are increasingly coming from Africa, Asia, and Latin America, where the cultures are much different from that of most Americans, and they are being asked to serve long-assimilated congregations.

Based on their survey of international priests, Hoge and Okure’s study found near consensus on two recommendations for the church: Dioceses should provide foreign-born priests with acculturation training, and “they should postpone the coming of any men with weak English or extreme accents.”

Say what?
Jim O’Malley, age 72, is a parishioner who has experienced the accent problem firsthand. He had begun having difficulty understanding the homilies given by immigrant priests at several Dallas-area parishes where he and his wife, Mary, attended Mass.

As its Catholic population has swelled from 200,000 to more than a million over the past decade, the Dallas diocese has increasingly brought in priests from the Philippines, India, Mexico, Vietnam, and Latin America. Roughly half of the diocese’s priests now come from other countries.

After his wife, Mary, died of thyroid cancer in 2006, O’Malley, an insurance industry consultant, wanted to do something in her memory. He approached the diocese and donated money to fund the Mary O’Malley Memorial Accent Reduction Program.

“I think for the most part senior citizens are irritated with the lack of language skills of our foreign-born priest but put up with it. Young people are entirely turned off and see no reason to put up with it,” O’Malley wrote the bishop. “We don’t want to lose our young people.”

O’Malley, a member of Serra International, a Catholic lay group that promotes priestly and religious vocations, says the need for foreign-born priests to improve their spoken English remains, at Mass and in the community. At his Serra chapter’s recent monthly breakfast, a Mexican-born priest was invited to speak. Afterwards the members agreed that they had no idea what the priest had said, O’Malley recalls.

“In one-on-one English, you can probably understand them, but when they are preaching, it’s useless in most cases,” O’Malley says.

As congregations grow and vocations dwindle, O’Malley says he recognizes that American Catholics should be grateful just to have a pastor, and he is. But in many of the Dallas area’s huge suburban parishes, some with more than 30,000 members, Mass is the only interaction many people have with the priest. They need to be able to understand him at Mass, he says.

Seung Ai Yang, associate professor of New Testament at the Chicago Theological Seminary, says if bishops are bringing in foreign-born priests simply to fill rectories, without offering intensive orientation training, they will only make things worse. She sympathizes both with parishioners and foreign-born priests who struggle to understand each other’s English.

“From the parishioner’s standpoint, I can understand their struggle,” Yang says. “It’s really unfair to both sides. From the beginning they are not supposed to be inviting pastors who are not capable of doing their work in a parish setting.”

For the most part, Yang thinks, American Catholics try to be welcoming despite the difficulties.

“If [parishioners try] to put themselves in the position of that priest, if they can imagine being placed in a foreign country and having difficulty communicating, they can understand that priest’s perspective better.”

Yang, who is Korean, says she applauds the initiative taken by O’Malley, but she doubts such training could have much of an effect.

“If a person doesn’t learn a language by age 12, it’s almost impossible to adopt the language to the level of a native-born speaker,” she says. “Even though I’ve lived in the English-speaking world for 20 years, English is still a foreign language for me. I cannot express as well in a foreign language what I deeply feel in my heart.”

Culture clash
Elizabeth, who asked that her actual name not be used because she feared repercussions at her job, is a Catholic chaplain at a major metropolitan hospital who says she has had mostly negative encounters with foreign-born priests, especially a fellow chaplain from India.

He often complains that the patients are not as deferential to priests as people are in India. He has told her that priests are considered “upper caste” in India and that servants had prepared every meal he had ever eaten before coming to America.

“He often criticizes our culture,” she says. “He criticizes our individuality and thinks we put too much emphasis on ourselves. I agree with him some on that. But he speaks so much in absolutes. I’ll say, ‘Some Americans aren’t like that,’ but he’ll say, ‘They all are.’ ”

Elizabeth thinks he is unhappy here, but he seems to enjoy days when he hears patients’ Confession, although she is troubled by his approach. When patients request Anointing of the Sick or Communion, he first scrutinizes them to see if they are actively attending church, she says. If they say they are not, he changes their classification from “Catholic” to “Christian” and gives them a blessing instead of anointing them. They do not realize they are not receiving the sacrament.

Elizabeth stresses that she has had many positive experiences with foreign-born men and women with whom she attended seminary.

So far so good
Despite some challenges with verbal communication, parishioners at Sacred Heart in Indiana seem content with Choorathottiyil after his first year as associate pastor. Rose Culp, 86, who invited Choorathottiyil to the Rosary Society meeting, says things have gone well.

Culp and others at Sacred Heart are just happy to have a priest. A year ago, a sense of panic swept through the parish when Bishop D’Arcy reassigned their pastor amid a backdrop of speculation that he was moving forward with plans to consolidate Sacred Heart with nearby St. Jude. Some parishioners defiantly registered their opposition to the merger by depositing green slips into the collection basket that read, “IOU. Not transferable to St. Jude’s. Redeemable when we get back our parish with a full-time priest.”

D’Arcy is moving forward with the consolidation plans, but Culp says tensions within the congregation seem to have eased, thanks partly to Choorathottiyil’s popularity.

“It’s a little bit hard to understand him,” she says, but then quickly notes that he hands out printed texts of his homilies on Sunday for parishioners to read along, which he largely follows.

“He is the sweetest man. Very gentle, very kind man. I’ve been through 10 or 15 priests at Sacred Heart and I can tell which ones are sincere and which ones are there because it’s their job or whatever.