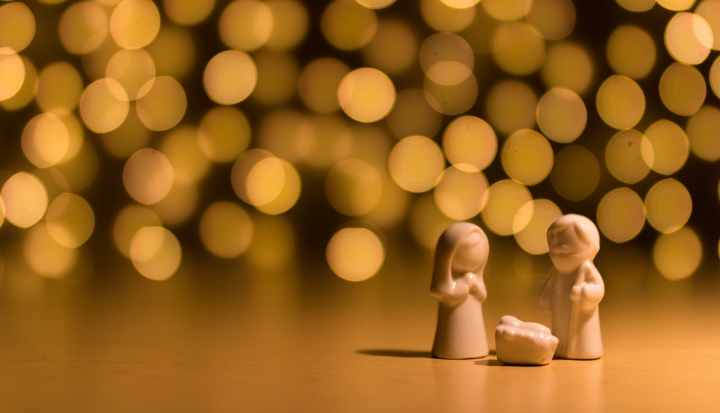 My aunt Teresa was a collector and creator of religious artwork. Like many women of her generation, religion defined life down to her taste in decorating. Jesus and Mary were very much part of family life; their pictures were displayed on bookshelves with other aunts and cousins. Everywhere she traveled a new statue of Mary would follow back home to her collection. For her large statue of the Infant of Prague in the dining room (affectionately dubbed “little Joe” by her brother), she had made an exquisite wardrobe that changed with the liturgical seasons—and caused my baby dolls a great deal of jealousy.

Gradually though, all of her beautiful things were packed up and given away as dementia began to steal her life. Among the few things that made the move with her to an assisted living facility was a tiny nativity set that I mildly disliked, its figures made to resemble overly sweet and precious children in pastel costumes. After Epiphany, as I was trying to help her put it away, Teresa protested so strongly that it simply remained displayed on the top of her dresser.

But as time and dementia wore on, funny things began to happen to the little company. Teresa would take to carrying one or another figure in her hand through the day, or she might tuck them in her pockets, or set them down in arbitrary places throughout the facility. No matter what the liturgical season, I found myself randomly accosted by reminders of the Incarnation in precious pastel.

The figures would show up at odd times in odd places. I was sorting her dirty laundry and a wee shepherd clutching his tiny lamb tumbled out of a pocket. Sweet Jesus, here they are again, I thought. What’s the message this time? Teresa’s laundry was always fragrant, with the soiled underwear hidden among it. The original nativity must have been a fairly fragrant event, too.

Once when taking my children to an outdoor Christmas light display in a rural county, we got out of the car to visit a large, wooden nativity scene with a few live sheep to complement the picture. As we drew nearer, their scent filled our nostrils. “What’s that smell?” asked one of my young city dwellers.

“That is the real scent of the first Christmas,” I explained.

I feel the same way about clean underwear, I thought, recalling that moment as I scrubbed away. A smiling little king who had arrived via laundry the week before was standing on the shelf over the wash tub offering his gift. Vulnerable human beings, the king reminded me, are gifts of opportunity, embodiments of the faith that someone cares, opportunities to provide the hand of our compassionate and unseen God.

Teresa had given her life over to caring for others. Never married, she cared for her parents, and after their deaths she supported herself with sewing, liturgical and otherwise, as she provided a ministry of advice to the many individuals who sought her counsel. She gave the gift of presence to others and simply trusted that God would return the gift for her when she needed it.

Once when we were taking a late afternoon walk outside, she stuffed her hands in her pocket to keep them warm and, as a cat-with-the-canary smile crept across her face, she pulled Joseph out of her pocket to show me.

“He’s a good one,” she said of the one who lifts his lantern to illumine the Light which illumines our darkness. How often did Teresa lift her lamp to reveal the presence of God in the midst of someone’s suffering? People could, and did, go to her with any problem and find welcome. Women and men brought broken hearts, broken marriages, broken lives to her kitchen table, and over coffee she set about stitching things back together with them. She approached life like a “Where’s Waldo?” puzzle. Somewhere in the midst of the painful, distracting mess of living, God is hiding, waiting for us to play seek and find.

I noticed Mary in her preciously annoying pink—the little mother who took the risk of Incarnation and changed the first holy diaper—sitting on a shelf across from the staff station one day. Baby flesh seems so different from aging and dying flesh, but it is not. The staff members that care for Teresa and others are exceptionally patient, humorous women, and most of them confess to acquiring those virtues by having cared for their own children. Mary who cradled the baby also received the body of her dead son back to the same lap. Incarnation has its consequences.

These days I anticipate the king with the myrrh to show up soon. Hospice care has already arrived bearing gifts of incontinence supplies. Teresa wanted to live until 93, but this process is unlikely to spare her that long. She is forgetting how to eat. Only cans of nutritional supplement keep her on this side of a veil that slowly, like her frame, grows thinner and more frail.

Teresa seems to face the certain nearness of the abyss with calm and bids me also to cease distracting myself from its fearful darkness and enjoy the view. But I build barriers against the inevitable most days; it is still difficult to conceive that her flesh will cease to be joined, however tenuously, to her generous spirit.

I think there was an angel in the set, but I have not seen her recently. Like Teresa and so many other souls with dementia, the little angel is living outside of time now, too. The chronological march and the endless repetition of days, which seem to hold such tyranny over the rest of our lives, are utterly defeated by Teresa’s eternal now.

Past and future merge into present as family members, some I remember only through pictures, come to visit, freely crossing the thinning veil into my consciousness as much as hers. Heaven seems not a distance to achieve but a presence growing already more full. I will miss these visits to the edge; as much as they have caused me to shudder and rebel, they are also teaching me to relinquish with trust to what I do not understand and cannot control.

I have not seen the little Baby Jesus around for some time either. I expect at some point soon, the Lord will show up, however, if not in his little plastic manger then eventually in person to bring a precious sister, no longer in need of pictures and statues, home to her family.