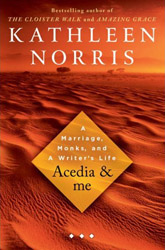 Did you know there used to be eight deadly sins? In the era of the Desert Fathers and Mothers, monks called them "bad thoughts" and included acedia (ah-SEE-dia), later subsumed into "sloth," which eventually emphasized physical, rather than spiritual laziness. Acedia has been defined as absence of care, soul weariness, melancholy, ennui, or despair.

The extent to which this concept has been lost is evidenced by the squiggly red line under the word on my computer indicating a misspelling. But modern-day monastic and bestselling author Kathleen Norris (Dakota, The Cloister Walk, Amazing Grace), who has struggled with the "noonday demon," perceptively noticed that the rampant boredom, escapism, and commitment-phobia afflicting individuals and society today may be a reincarnation of the ancient curse.

In Acedia & Me: A Marriage, Monks, and a Writer's Life, Norris tells the story of her own personal struggle with spiritual fatigue, interspersed with wisdom about acedia from sages ancient and modern. She surmises it has dogged her since her socially awkward teenage years, throughout her vocation as a poet, and during her marriage, especially as she served as caregiver to her ill husband in the last years of his life.

Throughout the book, she carefully treads on the topic of the differences between acedia and its clinical cousin, depression. Her late husband suffered from the latter and, like many, was helped by medication and psychotherapy. Norris, while not discounting the need for medical intervention, wonders if some acedia sufferers have been too pharmaceutically placated. In her case the spiritual treatment of discipline was just the cure.

Given this affliction's obscurity, I'm not sure the title Acedia & Me will jump out to spiritual seekers. But Norris' name will: Once again she delivers a poignant, meaningful memoir that combines her own story with the best of Christian tradition.