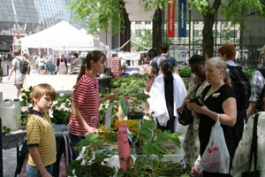 When Curt Ellis set out to learn about agriculture firsthand for his documentary King Corn (ITVS), he didn't find what he expected. "From an urban or suburban perspective," says the Portland, Oregon resident, "you imagine family farms and red barns."

This image is what he advocates for through his documentary and presentations. For King Corn he and friend Ian Cheney farmed one acre of corn and followed the corn through the food chain. They discovered that in corn, "we've wound up mass-producing a crop that has no nutritional value," Ellis says, pointing to high-fructose corn syrup and corn-fed meat. At 28, he is especially worried about obesity and diabetes in his fellow young Americans.

Ellis wants U.S. farm policy to encourage production of "a carrot that's going to look like a carrot, not a corn cob that's going to be eaten looking like a Pepsi." Consumers of all religions, says Ellis, who attends a Mennonite church, need to see that the food system stands in contrast to their values.

Jeanne Brophy, a Catholic living in San Francisco, lives her values by buying local foods. For the past few years, she has participated in the 30-day Eat Local Challenge, eating only foods from within 150 to 200 miles of her home.

"What it was for me was an awareness tool. By the end of it I had changed some habits," Brophy says. She now goes to the farmers' market every week and estimates that 80 percent of her diet is local foods.

Similar to the practice of Lent, she says, "it's not so much about what you're giving up; it's about what you're gaining." Brophy's local diet has allowed her to become a steward of the earth, to appreciate the act of eating and the food, and to foster community. At farmers' markets, for instance, "people are friendly and you actually talk to your fellow human beings," she says. "I think that's what God intended."

Finding community-"where we're not shoved up next to our neighbor, where it means something to have a neighbor"-is what led Bill and Michelle Worley to move their six children from Minneapolis to rural Wisconsin in 2006, Bill Worley says.

The Worleys are part of a growing movement of "hobby farmers." They bought their 22-acre farm in Elroy, Wisconsin for less than a house in the city and rent out 12 acres to a neighbor. A vegetable garden and farm animals provide food for their table but don't earn them significant money. Bill is a sales representative, and Michelle home-schools their five youngest children, ages 1 to 9.

The Worleys wanted a farm close to a church that offered adoration and Latin Mass, but their decision to move to the country came down to family values. Farm life offers a place "where our kids could grow up and learn the value of work and still be able to go outside and play, and we wouldn't have to worry about them," Bill says. "Besides a lot of work, it's part of our lifestyle."

It's a lifestyle that city folk and country folk alike want to see fostered for generations to come.

Image: Photo courtesy of the City of Chicago