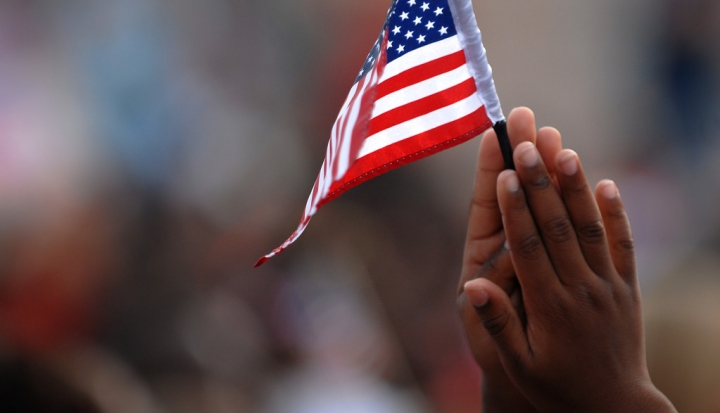 “It’s a good thing we’re white,” our 7-year-old son Atticus said, prompting my husband to almost leap out of his chair in pausing the movie we were in the middle of watching. The movie was The Help from Kathyrn Stockett’s novel by the same name, which exposes the continued slave treatment of “the help” in Jackson, Mississippi in 1962. The scene responsible for our son’s precocious observation of his white privilege involves the violent arrest of maid Yule May. Yule May is thrown against a police car before being forcefully shoved into the backseat while her fellow maids urge her to stop fighting.

“Why are they doing that?” asked Atticus. “Why is she kicking?” My husband, Michael, and I exchanged quick glances that silently asked each other: How much of this are we going to get into? What is he ready for?

But it’s election year 2016 and the reality is we’ve already had a lot of really tough conversations with a 7-year-old boy who is right on that cusp, both clinging to his Hot Wheels and surreptitiously watching news events we’d rather shield him from. The recent campaign battleground between presidential hopefuls Hillary Clinton and Donald Trump piqued his curiosity. He wanted to know who we were voting for and how we made those decisions.

Like most parents, Michael and I proceeded with caution. Neither of us were eager to expose our son to the state of the world he would eventually be called to participate in. Unpopular with many voters, Hillary Clinton and Donald Trump represented policies and behaviors that challenged the most diehard party advocates on either side of the aisle. The one thing most of us can agree on is we are far more divided as a nation than many of us could have imagined. But this is not a reality any of us wants to give our children. Who wants to hand down a legacy of division and dysfunction? How do we even begin to break down the state of our nation to those whose job it will be to keep the great American experiment afloat?

The Help helped largely because it removed the conversation from specific candidates and gave us an opportunity to point to obvious good and evil. Throughout the movie, we paused frequently to answer questions: “What’s wrong with saying it’s good we’re white?” “Why doesn’t Aibileen just get a job somewhere else?” “Why can’t she just tell the police she didn’t steal that?” “Why does Miss Elizabeth do whatever Hilly says?”

The first and last questions proved the most useful in giving our son answers to questions we hadn’t quite been able to resolve over the last few months of the election season.

“We are lucky we’re white,” Michael started carefully. “That’s called privilege and we have a lot of it. But that means we have to do more to help the people who don’t have it—”

“A lot of people are treated poorly just because of the color of their skin or where they were born,” my husband continued. “You have to make sure they are treated as well as you are. That’s all of our jobs.”

Our son nodded and waved his hand as if to say, Yeah, yeah, I get it. Back to the movie. But then came that scene near the end of the film when the film’s villain, the spiteful Hilly Holbrook, falsely accuses Miss Elizabeth’s maid Aibileen of stealing and fires her on the spot.

“Why does Miss Elizabeth do whatever Hilly says?” Atticus asked. “Miss Elizabeth’s not the bad one. She didn’t fire Aibileen,” he continued.

Another quick glance between Michael and I was exchanged.

Again from our son, a nod and a wave of the hand. I got it already, he seemed to say. Let’s get on with the show. We sat in silence during the end of the film, Michael and I both wondering what was being processed and what wasn’t. How much can a 7-year-old really understand about the hateful motivations that are so alive in our world today? How much are we supposed to protect him from them and how much are we supposed to make him aware of? After the movie, my son did a classic Atticus move. He bounced around for a bit with a forced sort of joy before dissolving into a pile of weeping. It’s like his body is warding off a wave of sadness at first and then just cannot help but surrender to it.

We comforted him. There were probably Popsicles involved, but mostly, we let him have his tears. We let him be moved by all that hate. For just a night in the comfort of his home with his parents there to protect him, we let him experience some of the dark reality that surrounds him. Later, he went to bed, all cried out and at rest again having returned to the childlike blanket that still protects him from everything.

Who knows what wisdom he’ll wake up with in the mornings to come. We didn’t talk about the electoral college, the call for vote recounts, or what it means for Donald Trump to be our president-elect. I’m not sure any of us is ready for those specific conversations just yet, but at the very least we found a good place to start in the easy comfort of what is obviously right and obviously wrong. And when he’s ready, we’ll have a baseline to talk about all the gray areas that are harder, more complicated, and that require maturity to understand. It would probably help if we understood better ourselves. Until then, our 7-year-old can sleep. Tomorrow, the world and all of this is his. 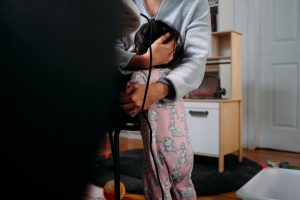 How do you balance parenting and work?