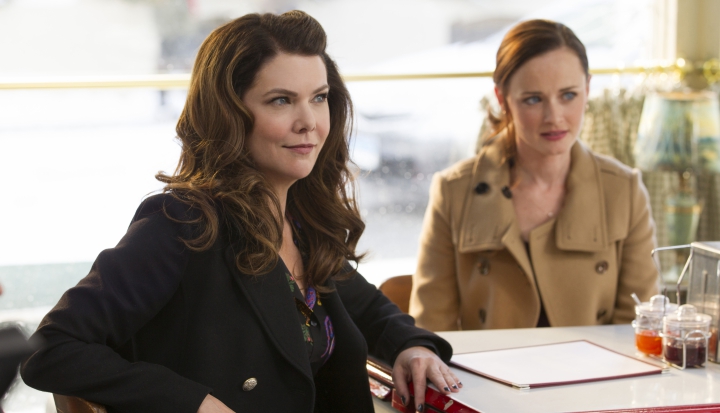 In the spirit of Rory Gilmore’s love of the pro/con list, this review of the long-awaited return of our favorite mother and daughter duo will take the same form. While I’ll refrain from quoting the final four words, references to it will take place as I assume most readers will have pulled a Lorelai and Rory and binged all four episodes over the weekend while eating pizza and Pop-Tarts.

Pro: The continuity of spirit in the revival. With original writer Amy Sherman-Palladino back at the helm and with nearly every former cast member on board, the whimsical, frothy spirit of the show 10 years after the series finale is alive and well. The rhythmic and buoyant narrative with a heavy reliance on pop culture are all there starting with the opening scene of the Winter episode when Lorelai asks Rory if she’s been Gooped (a reference to Gwyneth Paltrow’s lifestyle site).

Sherman-Palladino and her husband Daniel are responsible for the surreal life-in-a-snow globe quality of Stars Hollow, that fantasyland fans wish was a real destination we could visit. The snow globe is even brighter and more magical in the new episodes with more of the hidden nooks and crannies of the town revealed. Who wouldn’t want to drink martinis with Michel and Lorelai at the Secret Bar with the smooth jazz stylings of Lane and Zack in the background, especially now that the town has upgraded to a sewer system? Oh, Stars Hollow, we have missed you!

Con: The lack of continuity in the Rory’s character. While Stars Hollow remains the same, Rory is a little too changed, a little too incongruous with the serial monogamist with an encyclopedic knowledge of every citizen in Stars Hollow we know and love. Seriously, a one-night stand with a Wookiee and a boyfriend she keeps forgetting exists? Are we to believe our girl has become flighty and irresponsible in the 10 years since we saw her last? It’s a stretch in character not even 10 years can account for.

The greatest flaw in Rory’s character is that she hasn’t evolved from the self-centered girl who allows herself to sleep with married and engaged men without remorse. I’ve always been Team Logan, but it’s hard to watch Rory reduce herself to mistress status when she could have either demanded Logan’s loyalty (he is obviously still completely in love with her) or retained the glorified status of the one who got away. Our girl is smarter than this, isn’t she? The Rory we know knows better.

Pro: Thankfully, we’ll always have Paris. Ten years after graduation brings us to a wildly successful Paris Geller (did we ever doubt it?) who is both a licensed doctor and a lawyer running a surrogacy firm. She and college boyfriend Doyle have two children and are on the verge of divorce, but the divorce will never take. Who else could manage and appreciate the tornado-in-a-bottle that is Paris other than Doyle? Even Paris admits the sex is “volcanic.” If Sherman-Palladino does give us any more episodes of the series, let us find Paris and Doyle in the same pre-war apartment now fitted with an elevator, a sign of their compromise and movement upward with each other.

In the Spring episode, Rory and Paris return to Chilton Preparatory School for an alumnus event which gives Paris the opportunity to revisit the insecurities that plagued her through high school. High school heartthrob Tristan still makes her feel invisible and Puff princess Francie still holds way too much power over Paris, but a couple high kicks to the bathroom wall return Paris to her matured, dominant self. Liza Weil is a talented actress who has always brought a rich vulnerability to a character that could have been a mere stereotype.

Con: While I could have had more Paris, I could have had less Sutton Foster. I’m the first to swoon over the talents of Broadway giant Sutton Foster, but I cannot understand the choice to devote so much time to a character who was never a part of the original series. Taylor Doose’s Stars Hollow: the Musical offers the charming sort of town life backdrop that makes us want to visit Stars Hollow, but the half hour dedicated to showing the actual musical with its tap-dance numbers, Hamilton rip-offs, and nonsensical ABBA sing-a-long was overdone.

And what are we to make of Lorelai’s lone criticisms of the musical? Is she done with Stars Hollow? Is she no longer a part of its idiosyncratic sensibilities? Is she more of a Gilmore than she thought? The questions are left without conclusive answers, which is a major con in my book.

Pro: Inconclusive is not a word to describe the perfectly measured dramatic arc of the recently widowed Emily Gilmore, whose grief nearly punches through the screen. Every scene with Emily brings us closer to the satisfying release of the tightly controlled hostess role Emily has clutched fiercely her whole life.

Finally, we see the Emily we always wanted, the one who peeked out from beyond her stony D.A.R. façade every now and then to get tipsy with Lorelai or kick the ne’er-do-well Christopher out of the house at just the right moment to show Lorelai she always had her back. Her saunter across the room and obscenity-riddled blow-up at her D.A.R. social circle were delicious, but it’s the embrace of her maid’s family that gives fans the real sustenance of her evolution. In the light, airy beachfront home of Nantucket, Emily Gilmore is finally surrounded by family and is free of all the “bullshit” that used to run her life. Despite the dramatic change, this is still an Emily that Richard Gilmore would know and love.

Con: Are any of us wild about the Wild storyline? We never should have had to see nature-hating Lorelai Gilmore heave a backpack over her shoulders. There are plenty of I-need-to-find-myself narratives that would fit the Lorelai eight years of the Gilmore Girls gave us, but a Cheryl Strayed-inspired adventure on the Pacific Crest Trail was never one of them. This storyline feels like it was created by someone who never watched Lorelai and Rory watch Grey Gardens. A pilgrimage to Long Island to visit the ruins of the Grey Gardens house would have been more consistent with the Lifetime movie-loving Lorelai and would have benefitted from the resonant qualities of Big Edie and Little Edie reflected in Lorelai and Rory as they age. I’m just saying, that would have been a good idea.

Pro: Speaking of odd ducks like Little Edie, is it just me or is this the Kirk that Kirk was always meant to be? Kirk’s weirdness was no more profound than when he performed his wildly uncomfortable interpretative dance of the Qatsi film trilogy on Miss Patti’s stage in season six of the series. The Kirk in the final four episodes is just as weird (as evidenced in his homage to Eraserhead and A Second Film by Kirk), but the updated Kirk is balanced by a self-confidence and awareness we never saw in him before. His Alice-in-Wonderland wedding decorations for Lorelai and her subsequent text telling him how perfect all of it is suggest a Kirk who has benefitted from the 10-year stretch between our last meeting and now. It’s a version of Kirk that allows him to be loveable and not merely strange (not at all unlike Little Edie herself).

That was my first thought as the credits were rolling, but then I thought more about the scene between Rory and Christopher and appreciated the seminal nature of their exchange, particularly for how little it revealed without the benefit of hindsight. That Rory is exactly twice Lorelai’s age has a lovely symmetry to it. Clearly, there is a parallel structure working here that gives viewers the opportunity to fill in blanks that would otherwise remain unfilled. The golden ratio that clarifies what happens after those final four words is the following: Logan is to Rory as Christopher is to Lorelai. Here’s another: Jess is to Rory as Luke is to Lorelai.

So there’s the future of the Gilmore girls perfectly laid out with the benefit of algebraic language. The academically snooty Richard Gilmore probably would appreciate the use of equations as narrative force.

For my part, I fully expected the final words to come from Jess. While I remain Team Logan, I’m sensible enough to recognize that Jess is the only one of Rory’s suitors who is both friend and love interest. Because of all the pre-revival talk that focused on Amy Sherman-Palladino’s intention to bring things full circle, I thought the final words would be, “I’m all in, Rory,” a reference to a romantic touchstone between Luke and Lorelai. Arguably, given Jess’s longing look at Rory through the window in his final scene, “I’m all in, Rory” might just be the final words in spirit if not in actuality. It gives us the full circle storytelling Team Sherman-Palladino and Palladino have been promising for years. And I, for one, would watch another eight seasons of that.

Pro Runners-Up: A pitch perfect Melissa McCarthy combined with an obscure reference only Amy Sherman-Palladino could pull off to the cow Sookie in a Little House on the Prairie story. Sam Philip’s “Reflecting Light” during the montage of Luke and Lorelai’s wedding scene. Everything about Jess Mariano. Emily Gilmore’s twilight career as a nightmare-inducing tour guide at the whaling museum.

Con Runners-Up: The return of the perennial jackass that is Mitchum Huntzberger. All the minutes after the first lunch scene that were dedicated to the storyline of Naomi Shropshire when only one was necessary. Rory’s inexplicable choice to send boxes of her possessions all across the globe. Lorelai’s dreams about the dog Paul Anka becoming the real Paul Anka, which were never fully explained.

TagsIn and of the World Reviews