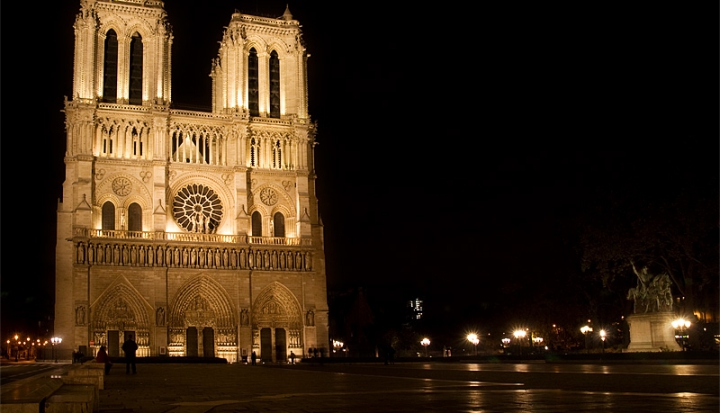 My phone pinged with an email from my colleague, Dennis Coyle. He was away from the university, giving some lectures in France. The email he sent was from Paris, with a photo of the Cathedral of Notre Dame illuminated against the darkness. Dennis had joined the thousands who streamed to the cathedral for the memorial Mass for those dead and wounded by the evil of Friday’s terrorist attack. He described the scene outside the cathedral, packed with people who could not find room inside, the night brightened by the many watching Mass on their phones. People were singing along with the liturgy.

Here was an outpouring of love and faith against what Pope Francis called the blasphemy of terror. Here was a moving display of courage as Parisians publicly came together en masse along boulevards still stained with the blood of innocents. The photo of Notre Dame is a vignette for all of Paris—the City of Light, bright against the dark.

Terrorism is a cold, deliberate, and calculated evil. Its purpose is to instill fear and invoke hatred in us: fear to enervate our resolve and shake the foundation of our values and hatred to blind us with passion and darken our vision.

After last January’s Charlie Hebdo terrorism in Paris, it was inspiring to see the magazine then mock the terrorists with comic satire, much as Daffy Duck and Bugs Bunny mocked Hitler during World War II. We will not fear you; we will not give in to your dark hatred. We laugh against your evil.

During the Blitz, Londoners refused to give in to the daily terror from the skies. They kept their shops open, operas still sang at Covent Garden, the red doubledeckers still made their rounds despite the rubble. The weapons of terror failed in the face of the famed British stiff upper lip and the glorious English virtue of muddling through.

Of course, for Christians, such as those thousands who gathered at Notre Dame on Sunday evening, our resolve, values, and vision flow from the unshakeable love that is the light of our faith. Confident of divine love, the darkness of hatred and fear finds no hold among believers. Terrorism cannot prevail.

Next week, I will offer analysis of the origins of Daesh terrorism and consider what the United States and the world might do to eliminate its evil. For now, though, our thoughts should be with the families of those injured and slain in Friday’s attack. Let us join in solidarity with those who gathered at Notre Dame and so many places elsewhere in the City of Light, in France, and around the world and—whether laughing, muddling through, or holding up the light of faith against the darkness—insist that terror will not prevail.