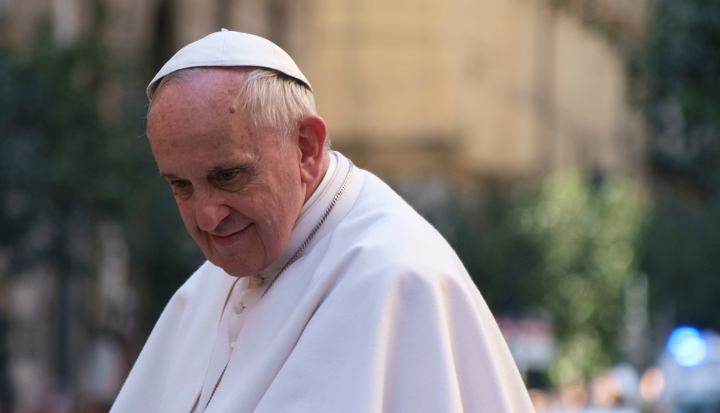 Last week, Pope Francis issued his most urgent and sweeping indictment of the structural immorality of the global economy to date.  It was an astounding talk presented in Bolivia before a conference of popular movements. Declaring that “our faith is revolutionary, because our faith challenges the tyranny of mammon,” the pontiff called upon the lowly, the poor, and the marginalized of the world to mobilize against the economic system’s “subtle dictatorship.” This dictatorship “at times appears as the anonymous influence of mammon: corporations, loan agencies, certain ‘free trade’ treaties.” It’s a system, the pope insists, that “runs counter to the plan of Jesus.” He called us to rebuke it.

Let us say NO to an economy of exclusion and inequality, where money rules, rather than service. That economy kills. That economy excludes. That economy destroys Mother Earth. The economy should not be a mechanism for accumulating goods, but rather the proper administration of our common home. This entails a commitment to care for that home and to the fitting distribution of its goods among all.

The power of what the pope is saying and the urgency of his call to enlist us in resisting the evils of the global economic order are unparalleled in papal history. Theologians will insist that the pontiff’s remarks are not a new message, that encyclicals and Catholic teachings have criticized an economy of greed and its corresponding society of materialism for more than a century. That Popes Benedict XVI and Saint John Paul II and Saint John XXIII made similar remarks. Yes. But nobody, certainly no pope, has spoken such words, deeply rooted as they are in church teachings and traditions, with such passion. From the mountain tops of Bolivia, it’s as if this pope is shouting out to the world what so many who have spoken for the church in recent decades have only mumbled—and, in some quarters, have mumbled as if with embarrassment.  Why such urgency now? Because, as he warns, “Time, my brothers and sisters, seems to be running out.”

In some Catholic circles, perhaps especially here in the United States, objections will be raised against the pope’s words. People will say there’s no problem with wealth distribution or property or the market.  Except for cronyism or government interference or a few bad apples, they’ll say the system is wonderful, a marvel of equitable distribution, efficiency, and progress. There is no need for structural economic change.  The bad apples can be fixed with more private virtue, more private philanthropy. But Pope Francis has a response to these objections:

Working for a just distribution of the fruits of the earth and human labor is not mere philanthropy. It is a moral obligation. For Christians, the responsibility is even greater: it is a commandment. It is about giving to the poor and to peoples what is theirs by right. The universal destination of goods is not a figure of speech found in the Church’s social teaching. It is a reality prior to private property. Property…must always serve the needs of peoples.

Not philanthropy, “It is about giving to the poor and the peoples what is theirs by right.” A while back Rush Limbaugh called Pope Francis a Marxist. Others in the media ask about liberation theology. But what inspires the passion that Pope Francis brings to these traditional Catholic teachings is neither ideology nor theory. I’m convinced that what propels this pope is his frontline experience preaching the Gospel in the villas miserias of Argentina. “We do not love concepts or ideas,” he explained in Bolivia, “we love people.” It’s not some political agenda behind the urgency of his papacy. His is an urgency that comes from face-to-face pastoring to the throwaways of the modern world. It’s an urgency that seizes the soul on encountering the beautiful face of Christ staring up from the forgotten, the marginalized, the oppressed, and the discarded.

And behind all this pain, death and destruction there is the stench of what Basil of Caesarea called “the dung of the devil.” An unfettered pursuit of money rules. The service of the common good is left behind. Once capital becomes an idol and guides people’s decisions, once greed for money presides over the entire socioeconomic system, it ruins society, it condemns and enslaves men and women, it destroys human fraternity, it sets people against one another and, as we clearly see, it even puts at risk our common home.

Pope Francis tells us that morality and our Christian faith demand that the economy should not be a mere “mechanism for accumulating goods.” Instead, it should be what he calls “a truly communitarian economy” directed toward “the fitting distribution of goods among us all.” The economy should serve to ensure human dignity and provide for our temporal welfare, including “access to education, health care, new technologies, artistic and culture manifestations, communications, sports, and recreation.” It should be an economy that provides for “childhood without want,” “work with full rights,” and “a dignified retirement.” He says that the truth of the failings of the global economy and the truth of what a moral economy should be have been clear for decades. And, what’s called for from our generation of Christians is neither more talk nor more analysis.

What can we do, though? “What can I do as a craftsman, a street vendor, a trucker, a downtrodden worker if I don’t even enjoy workers’ rights?”

Our pope enjoins us to not despair and not to be paralyzed with fear for our own material needs, desperate as they may be in some cases. He calls us to rise up “from the bondage of individualism and the despondency it spawns” and to organize in solidarity with society’s outcasts for community action. Praising popular movements, he speaks of “establishing in each diocese, in every justice and peace commission, a genuine, ongoing, and serious cooperation with popular movements,” including with labor unions.  He counsels us to look to the Virgin Mary—“A humble girl from small people lost on the fringes of a great empire, a homeless mother who could turn a stable for beasts into a home for Jesus”—for the heart we will need to stand in such solidarity and be a leaven for change. The pope promises that “Mary is a sign of hope for peoples suffering the birth pangs of justice.”

The Holy Father concluded his talk in Bolivia by asking that we pray for him. I’ll be down on my knees.