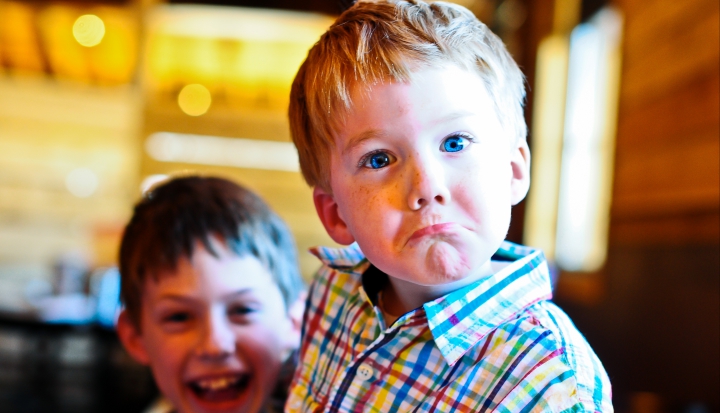 Until I had children, I didn’t understand Mass as an athletic event. Before we even get to the homily, a point when many Mass-goers get to sit and relax, I have perspiration on my upper lip and forehead. My arm muscles burn from balancing an ever-curious baby on my hip and wrangling a 3-year-old who would like very much to escape the pew and race down the aisle to the altar. While these two Littles keep me and my husband hopping, it’s our 8-year-old whose constant pursuit of distraction makes me feel like I’ve run a marathon by the time the recessional hymn begins. He is Bored with a capital B and looking for every opportunity to distract himself even though, having received his First Communion this past spring, he knows the importance of what is happening there.

At Mass, more than any other time throughout the week, my son becomes very interested in his younger sisters. He begs to hold them, pulls their shoes off to tease them, and engages them in loud games of peek-a-boo. Often at Mass, he is suddenly very sick or very tired or the bug bite he got the night before becomes unbearably itchy. The legs he has been running around the neighborhood on for the last several hours without complaint, are suddenly way too tired to be used for kneeling. His arms are too weak to hold up the hymnal. He desperately needs to pee, like, right now. Or he suddenly remembers a long, drawn-out story he has to tell me just as Father is beginning the liturgy of the Eucharist.

In short, he is bored. We go to Mass every Sunday. Our son attends a Catholic school where he goes to Mass twice during the school week. On all three of these holy occasions, he is inattentive and impatiently biding his time until its over.

We have tried many things to engage his interest. We took First Communion prep seriously and carefully explained the meaning and Order of the Mass. We bought books that introduce young Catholics to the beauty of the liturgy and Christ’s presence in the host. We talked about the why and when of things. We bring his MagnifiKid and First Holy Communion book to church every week for him to follow along in. We ask leading questions about school Mass where the priest actively engages him and his fellow students in the hopes that his recall will show more involvement than what we see on Sundays. We serve as example to him with our regular Mass practice. I have even threatened to quiz him about the readings.

But none of it works. He genuinely loves God and as much as an average 8-year-old boy can, he understands that it really is Jesus up on the altar. But either his imagination or our training or his age fails him when it comes to engaging with this holy hour. “Why are you so bored at Mass,” I ask him. “I don’t know,” he says, “It’s just when they start talking, I want to go to sleep.”

It’s not that I don’t understand his problem as I am not above getting bored with my Sunday obligation. But boredom strikes adults in different ways than it strikes kids. My boredom grows from genuine exhaustion or a mind struggling to slow down. With prayer and a quick spiritual kick to the head and heart, I usually have no trouble dialing back into the Mass. Plus as an adult, I recognize Mass as time when I get to put my mind on just one thing for the first time in a week and not feel guilty for shushing my children into silence. Lastly, it doesn’t hurt that it is my choice to be in the pew every Sunday; our children are dragged into complicity in the faith until they find a way to make it their own.

Until such a time when my son is able to do this, he’s probably going to be bored because the truth is Mass is boring when you’re eight. Sometimes it’s boring when you’re 38, 58, and 78 because Mass calls for a willingness to enter into the silence where God speaks to us. Unfortunately, there are a million things begging to be prioritized over that silence and communion with God and silence is a particularly difficult ask of an 8-year-old boy.

For the rest of us, we have weeks of boredom followed by weeks of engagement. We fall and get back up again. Sundays for me continue to be an athletic event as I physically, spiritually, and emotionally answer the call to raise my children with a Catholic faith practice. I sweat, wrangle, and harangue, and in so doing, my children at the very least, will come to understand what I value above all else—a moment before God, free of boredom, physical ailments, and concerns over what I have to do and where I need to be—just me and God, if only for one hour a week. 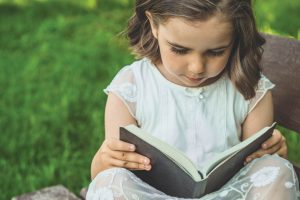 In a child’s prayer, the beauty of a steadfast faith