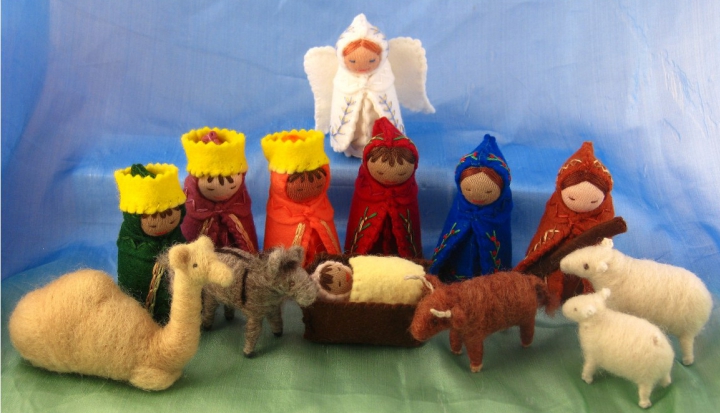 When our first child was a year old, the Christmas struggle got real. As first-time parents, my husband and I had some serious decisions to make about how we would present the Christmas season to both him and any future children. I wrote about that five years ago on this website.

Since that time, we’ve added one more child to the mix and a whole host of questions about how to both minimize the consumerism of Christmas and emphasize the preparation for Jesus’ birthday.

The first and biggest decision for parents is about the big guy himself, the man in red, Santa Claus. And let’s be honest. This isn’t a little white lie. It’s more of an all-consuming, jolly ol’ giant red-and-white lie.

“Is that all?”  I pressed, hoping we had not failed this miserably in giving our child a real Catholic awareness of Christmas.

“Well, they’re the same guy?” he said in question form, scanning my eyes to see if he had the right answer.

“Yup, same guy.” And we were both relieved, him for having the right answer and me for the assurance that we had put it there.

There are some parents who try to avoid the magic of Santa altogether, but we are not those parents. The suspension of belief readily available to all children is only good for so long. I say all hail the man in red who drops presents down the chimney, but I recognize this as a personal decision. As a Catholic, I also recognize it as only part of the story.

Our job, and an increasingly difficult one with a six-year-old who asks lots of good questions, is to marry the secular version of Santa Claus with the real Saint Nicholas, the bishop of Turkey who fully followed God’s command to sell what he owned and give to the poor. One of the ways we do this is to interrupt the non-stop Burl Ives Christmas cycle with the CCC video, Nicholas: The Boy Who Would Become Santa. This video does an excellent job of illustrating the life of a small boy whose consummate generosity resulted in the larger-than-life mythos of Santa.

And then of course, there’s the Feast of Saint Nicholas, a tradition long celebrated by Europeans, but only recently by Americans. My son clearly understands we say Saint Nicholas to refer to the guy who puts treats in our shoes on December 6, and the German name, Santa Claus, to refer to the guy who sends presents down the chimney. One has to wonder how children keep this stuff straight. My guess is as long as they keep getting presents, the questions will remain limited in scope. And when our children’s questions do get more pressing, it’s probably time to come clean about our red-and-white lie. In that coming of age, Saint Nicholas will still be there waiting for them.

My son’s favorite Advent activity is to update his Amazon wish list, an actively curated collection of fantasy toys. This Christmas, I hope to supplant this activity with a Jesse Tree. This tradition involves creating ornaments that tell the story of the Bible from creation to Jesus’s birth. If I’m being honest, I don’t expect it to overpower my son’s love for adding Skylanders to his Christmas list, but my hope is it might give him some scope, as in Skylanders, not so important. Jesus’ birth, hugely important.

Gold, Frankincense, and Myrrh—that’s all Jesus got. Of course, one of my nieces is to quick to point out that if she got gold under the Christmas tree, she could buy herself an awful lot of presents, but that’s not the point. The point is that my son’s obsession with curating his Amazon wish list is only rivaled by my obsession with online Christmas shopping. If I limited presents to three per person in the tradition of what our own Lord received on His birthday, I’d have a lot more time to really prepare myself for Jesus’ birth. It’s too late for me this year as the aforementioned son and the daughter who is almost big enough to understand opening presents for the first time will receive a few more than three (read: more like ten each). But next year, prepare ye the way, young children. This is the best practice we will be employing.

When I was little, every Christmas morning meant kneeling not in front of the nativity, but over the toilet where I would throw up in anticipation of all the Christmas activities awaiting me. This tradition was so consistent, it was not even questioned in our house, as in, “We’ll open presents when Molly’s done with her traditional Christmas morning throwing up.”

While my stomach is kinder to me now as an adult, the anticipation of Christmas and family and joy is still huge for me and when it’s over, it’s difficult to come back down to real life. In the interest of giving my children an after-Christmas cool-down in case they take after me, our new practice is to play Hide the Wise Men until the Epiphany on January 6.

This is our last best practice for Christmas. Forget Elf on the Shelf, that mischievous imp who somehow keeps ending up in ice trays or saddling ornaments. That guy would have ramped up my pre-Christmas anticipation to uncontrollable levels. Instead, I am borrowing a friend’s tradition whose children wake up every post-Christmas morning to find where the Wise Men are on their way to honor the newborn king. As each day passes, the toys may lose a little luster, but the pursuit of Christ will still be active and present. And at the end of the day, I really can’t ask for more than that out of a Christmas tradition.