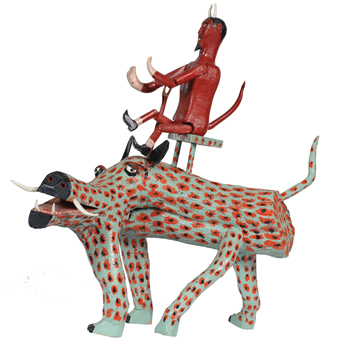 The sprawling exhibition HEAVEN+HELL, a joint project of two Chicago museums, the Loyola University Museum of Art (LUMA) and Intuit: The Center for Intuitive and Outsider Art, uses the works of self-taught artists to explore familiar, complex, and even surprising terrain. The exhibition’s curators, Jan Petry of Intuit and Molly Tarbell of LUMA, selected “intuitive and outsider art,” which Intuit describes as the “work of artists who demonstrate little influence from the mainstream art world and who instead are motivated by their unique personal visions.”

In his book What Are They Saying About the End of the World? (Paulist), Franciscan priest Zachary Hayes notes that “the central Christian metaphor for the end of history is the parousia or the second coming of Christ. Around this center is a cluster of related themes: judgment, resurrection of the dead, heaven and hell, the kingdom, the new heaven and the new earth.”

Hayes makes the concept sound neat and precise, but the various denominational and cultural languages of HEAVEN+HELL’s artists add their own nuances and emphases to these artistic depictions of the endtime. Drawing upon their personal visions and faith perspectives, their own investigations and theories, and biblical and religious traditions, the artists strive to imagine where the world is going and what will come to pass. Predictably, the gathered collection reflects a multiplicity of ideas.

Works such as Sister Gertrude Morgan’s Lord Put Another Fuse in My Soul (above) use the vocabulary at hand—in this case modes of transportation—to speak of going to another, often better place, while acknowledging both the less attractive alternatives and the hardships along the way. A few works in this exhibition express hopelessness, but most express trust in the one who promises to “make all things new” (Rev. 21:5).

Installed in two venues, the collectively imagined future these artists provide offers both the expected and the unconventional—an engaging visual journey.

McKendree Robbins Long uses Chapter 16 of the Book of Revelation as his inspiration for Seventh Angel Pours Out His Vial Upon the Earth. The painting shows the end of time as terrifying, the natural world as unsafe and disintegrating. It resembles a still from an action film—except there is no hero to save the day. Though its intensely detailed composition offers endless scenes to scrutinize, this work ultimately makes me consider the God behind this event—specifically the difference between how the author of the Book of Revelation and Long would describe God.

The Rev. Samuel David Phillips writes biblical references on his teaching aid, Untitled (Seven-headed Beast). Most likely an attempt to illustrate the beast described in Revelation 13:1-2, Phillips’ creature hovers between being ferocious and odd; its beautifully patterned body and rhythmically drawn manes seem unrelated to the background of horns and diadems which, though meant to convey menace, seems more like a partial halo. Phillips gives us the portrait of an evil creature he thinks should be avoided, but all I can see is the portrait of a beloved—if unusual—pet.

Those who read scripture with an eye to its context and history might see the Revelation passage as a way for the ancient writer to express (in a veiled fashion) the dangers of being Christian in the Roman Empire. With seven being the biblical number of completeness, this schema gives us a multi-headed animal that signifies a succession of emperors with no end of the world in sight, only the acknowledgment of a difficult present.

The title characters of William Blayney’s Four Winds of Heaven take on tornadic form and become the background for the beasts described in the Book of Daniel (Chapters 7 and 8). Blayney faithfully illustrates the recorded number of horns, wings, and heads; likewise he names and dates kingdoms and rulers to reveal his understanding of the symbolism of these beasts. The literalism and stress on identification, which characterizes the work of several of the artists in this exhibition, express how one strain of Christianity deciphers the Bible and predicts the future.

Even if thinking of heaven as “up there” and hell as “down there” rings hollow, this geography served Jessie and Ronald Cooper well when they transformed a piece of church furniture into the Heaven and Hell Pulpit (for Brother John).

The scene of the last judgment described in Matthew’s gospel (25:31ff) is only one of the many biblical passages that describe the “angels of heaven” and “the devil and his angels.” Though angels and devils are described as nonphysical creatures, their countless portrayals nearly always exploit the human form.

Many of the works in this exhibition conflate faith-inflected ethical perspectives and divine judgment with remarkable certainty. An untitled work by Leroy Almon Sr. (above) unflinchingly delivers a textual listing of what activities lead to both death and an afterlife in hell: sex, AIDS, money, alcohol, and drugs.

To make his point, Almon adds skeletal people, the devilish serpent, a scantily clad woman smoking a cigarette, two men kissing, and a skull and crossbones, pitting conservative Christian principles with a larger world that tolerates a wider range of behaviors.

John Serl’s Between Two Worlds does not rely on any code of conduct or religious reference to communicate the terror being faced by its central character. The ghoulish forms surrounding him could represent either internally or externally generated concerns. Like Edvard Munch’s The Scream, Serl’s piece embodies anxiety and angst, the drive to escape our fears and its ultimate futility—a hellish state that we have all faced.

Snakes, a manifestation of the devil (see Genesis 3), have also infiltrated the surface of Howard Finster’s A Feeling of Darkness. They join a variety of monsters, buildings resembling Finster’s Folk Art Church, clouds and mountains (some of which have faces), and text to create a dense surface to express Finster’s belief that “increasing evils multiplying” (sic). Naming evil people (“peacebrakers,” “spyes,” “meddlers”) and things (“bad checks,” “fraud,” “atomic weapons”), he concludes, “how can this world get any worser than it already is?”

Albert Zahn gives us a vignette (right) that could read as a set of directions: The middle angel figure looks like the person to its left with the addition of the wings of a bird sitting to its right.

In a similar fashion, Miles Carpenter adds a tail, horns, and lots of red to make a human figure devilish (far right). A found piece of wood becomes the “horse” of the work’s title (though it seems to possess swinish qualities) and gives the fiend a rodeo-ish ride. Jan Petry and Angie Mills Collection, promised gift to the John Michael Kohler Art Center.

View the above images as slides.